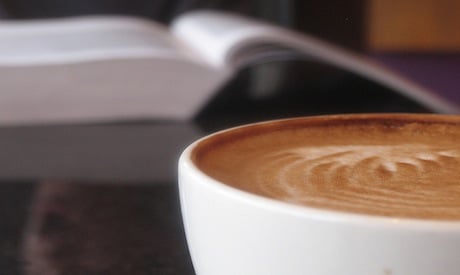 Caffeine. As far as vices go, it's the one most of us regard as safe, or at least, safer than other common vices such as cigarettes, alcohol or worse. At best, it can make us productive, focused, alert. At worst, we can overdo it—especially young people—which can cause physical problems, sometimes quite serious. But what we still don't quite seem to be clear on is whether or not caffeine is actually healthy for us or not.

Perhaps coffee had more of an allure when we did think of it simply as an exotic indulgence with a powerful aroma and ability to keep us energized. We took this bean and commercialized it to an incredible degree beyond just the morning cup of joe. You can now find caffeine in most sodas and many other soft drinks. It's in energy drinks and energy bars. Cracker Jacks even recently released a version of its beloved snack loaded with the stuff.

In recent years, studies have come out showing the benefits of some caffeine-containing products, mainly tea and coffee (and chocolate too, but it's a very low dose of natural caffeine). The research found daily coffee consumption may actually increase longevity and reduce the risk of certain types of cancer.

Other studies have found coffee consumption showed an ability to reduce the risk of heart and cardiovascular disease. And by now, you likely know the many reasons people praise tea and its healthy effects.

Synthetic caffeine, however—the chemical version found in sodas and energy drinks—is another story altogether. It absorbs through the body's digestive system more quickly than naturally occurring caffeine, which means a faster rush and a quicker, even more brutal caffeine crash. Which, in many cases, leads people to drink more of the stuff.  Energy drinks have even been linked to several deaths as a result of too much caffeine, and some scientists are now suggesting regulations be in place to help mitigate the possible risks of overdose.

According to NutraIngredients.com, University o Reykjavik, Iceland professor Jack James says caffeine deaths are being underestimated around the world, but are an "undeniable fact," and is suggesting taxes or even age restrictions on caffeinated beverages could reduce the problem. While caffeine regulations may still be far from a reality, monitoring your own caffeine intake—and certainly that of minors—can be a life-saving exercise.