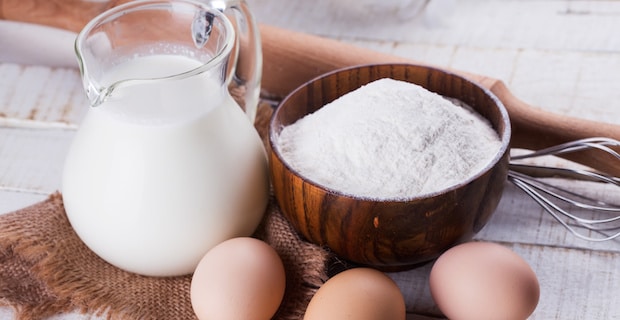 There was a time when having milk meant you owned a cow and you woke up early. Farm-fresh, not processed and simple, dairy milk was once a common foodstuff showing up as yogurts, cheeses, and other products like cream. Gone are those humble days, and now with factory farming, rBGH (recumbent bovine growth hormone) and the increase of antibiotic use on dairy cows, milk is no longer so clean and many are starting to look to other liquids for dairy alternatives.

Aside from changes in the use of milk, many peoples the world over cannot even tolerate dairy milk; some people are lactose intolerant, meaning the stomach no longer produces the enzyme lactase that breaks down lactose (milk sugar), while others are allergic to the protein found in milk, making dairy a food avoided all together. Lucky for us, the food kingdom has many great alternatives to offer.

It's important to note that when starting to use or choosing an alternative milk for baking, cooking, or other applications in recipes, taste the milk plain first to discern the underlying flavors. For example, many can tell when soy is used instead of dairy milk, as the characteristic "beany" taste of soy can come through in the finished product. Many of these milks also function differently than dairy because their protein, fat, and sugar contents vary greatly depending on what version of a specific milk you choose (i.e. low fat, non-fat, sweetened or unsweetened, flavored, or plain). Keep in mind that all proteins are potential allergens, so when you're feeding guests, let them know which milk ingredients you've used.

Goat and Sheep Milk
Though still coming from animals, goat and sheep milks function almost identically to dairy milk but can often be better tolerated by people with dairy sensitivities. Always choose organic and local if possible, and store according to package directions. These might impart a more grassy flavor to dishes and baked goods. Goat's yogurt is tasty with honey and fresh plums.

Organic Soy Milk
Made from the cooking and pressing of soy beans, soy milk is the closest to dairy milk in terms of protein and fat, but does not have the same calcium count. Some soy milk is also fortified with vitamins and/or minerals. Soy works well in baked goods, is a palatable beverage, and is good in smoothies, shakes, and some savory recipes. In some savory dishes a nutty bean "soy" taste can be imparted, though I have found great success using it in everything from soups to mock-cream sauces to cakes to yeast breads. Be sure to choose organic soy milk, as conventional soy is likely GMO.

Hemp Milk
Do not fear any drug connection here; hemp milk is made from the seeds of the hemp plant, which contain no THC. Hemp milk is nutty, a bit sweet, and has a distinct, pleasant flavor. Creamy and packed with omega-3, this choice is healthy and contains a decent amount of protein. Hemp milk works well in most cooking applications (sweet and savory), and is good for drinking. The higher fat content works well in baking and smoothies, but look for an unsweetened version or alter the sugars in your recipe.

Almond Milk
Almond milk has a delicious and light flavor, though it isn't as good a source of protein as dairy milk. Unsweetened almond milk will help control sugar content, making this a good option for the calorie conscious. This milk works really well in baked goods (stick to full fat for that), cereal, and hot cocoa or coffee drinks. Use in smoothies, and you can even make your own almond milk. This does not perform as well in some savory dishes but makes great soup.

Other Nut Milks
Cashew milk, hazelnut milk and other nut-based milks perform much like almond milk. All are made by soaking and grinding the nut meats into a pulp and then straining the creamy liquid. Containing protein and fat, the liquid can be rich and delicious, with each possessing resulting in a different taste, depending on the nut used. Play around with these, but watch for added sugars and flavors.

Rice Milk
Rice milk is quite watery and not creamy like dairy, but it's a safe substitute and can be used in baked goods. When baking with rice milk, increase the fat content of the item being baked. For drinking, it does not have the same nutritional make-up of dairy, lacking the protein and calcium, and many people aren't fond of the consistency.

Grain Milks
There are all sorts of grain-based milks, including oat and barley milk. Taste can be what you might expect… grainy and nutty. Though safe for those with nut and dairy allergies, it is not safe for anyone with gluten intolerances or celiac disease. These milks are light and much like fat-free dairy milk in consistency.

Coconut Milk: The white juice of coconut plants it is the combination of the coconut meat and the coconut water found inside the coconut. High in healthy saturated fats, coconut milk will be just as creamy, if not more so, than full fat dairy. Great for Thai-inspired soups and many baked goodies, coconut milk has a rich flavor that brings a note of the tropics to your foods. Though pure coconut milk is not a milk for drinking or cereal, in can be nice over oatmeal with macadamia nuts, and it is amazing when used as a base for smoothies, such as this Coconut Raspberry Smoothie.