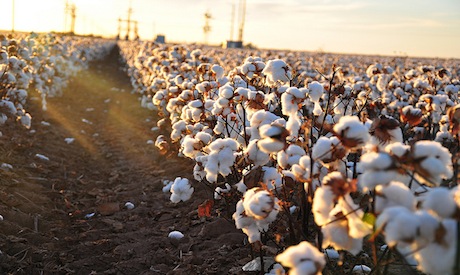 In just the last several decades, many of the world's major crops have largely been replaced with genetically modified versions: corn, soy, canola, sugar beets and cotton. More than 80 percent of all these crops grown in the U.S. are now genetically modified.

In the food world, we hear a lot of concern over the use of GMOs in common foods. We are weary of eating the modified seeds, and we are also concerned about the presence of toxic pesticides, which go hand-in-hand with GMO crops. And for good reason: pesticides are harmful to our health, our air, water and soil. But how often do we think about the other ways we are exposed to these genetically modified and pesticide sprayed crops?

If you are a woman, you may have overlooked one way that you are repeatedly exposed to pesticides: Your feminine hygiene products.

Read more about the hidden ingredients in conventional pads and tampons

Conventional tampons contain cotton (in addition to rayon and other ingredients). While we think of cotton as a clean and pure fabric (thanks to those "fabric of our lives" cotton commercials) it is actually the 'dirtiest' crop because it is one of the most heavily pesticide-sprayed crop in the world.

Worldwide, cotton crops make up just 2.4 percent of total cropland, but uses 16 percent of the world's supply of pesticides and herbicides. Each year, more than $2 billion is spent on pesticides for cotton.

Among the most common pesticides used on cotton are aldicarb, parathion, and methamidopho, which the World Health Organization cites as the most acutely hazardous to human health. According to the Organic Trade Association, "Aldicarb, cotton's second best selling insecticide and most acutely poisonous to humans, can kill a man with just one drop absorbed through the skin, yet it is still used in 25 countries and the US, where 16 states have reported it in their groundwater."

Sign our Petition: Tell Procter & Gamble to Disclose What is in Their Feminine Hygiene Products

In addition to the pesticides and herbicides sprayed onto cotton, nearly half of the world's cotton crops are now the genetically modified Bt variety (as of 2007). Bt, an insecticide, is genetically inserted into the DNA of the crop. It kills pests by exploding their stomachs, and some experts believe Bt food crops are responsible for the rise in digestive disorders that have paralleled GMO proliferation in the last several decades.

As we know, what we put in our bodies-be that through the mouth or otherwise-is absorbed and processed. Pesticides on cotton tampons may pose risks to our health-from the acute irritation of the vagina to other more serious potential health risks.Read: A Tampon Experiment: A Picture Tells the Tale

Pesticide exposure has been linked to cancer, reproductive and neurological issues, suppressed immune function, obesity, heart disease and even autism.

To err of the side of caution, opt for tampons that only use organically grown cotton, or try a catchment system like the silicon Diva Cup, which is reusable.

What Are Your Tight Hips Telling You?