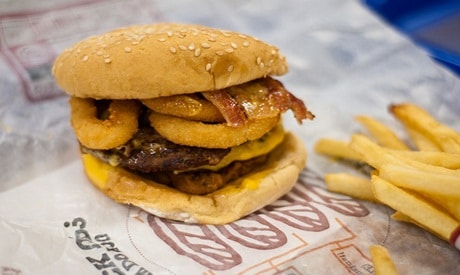 According to a report by the Centers for Disease Control and Prevention (CDC), Americans are eating slightly less fast food on a daily basis. American adults get on average, 11.3 percent of their total daily calories from fast food which is down from 12.8 percent from 2003 to 2006. In other words, on average American adults ate just over one-tenth of their percentage of calories from fast food. The CDC looked at data from the National Center for Health Statistics from 2007 to 2010.

The CDC found only a slight difference in Americans among men (11.8 percent) and women (10.9 percent). However, researchers did find that fast food consumption increased as weight increased. There were also differences among ethnic groups. African-American adults consumed a higher percentage of calories from fast food compared with Caucasian and Hispanic adults. Among adults aged 20 to 39, the African-American adults ate more than one-fifth of their daily calories from fast food. Differences across income status were only found among young adults. As their income increased the amount of fast food they were eating decreased.

Age is another factor that was considered. According to the report, calories consumed from fast food significantly decreased as the adults got older. Adults 60 years and older were only eating six percent of their daily calories from fast food, which was the lowest rate among age groups. Regarding older adults, there were no differences found among the different ethnic groups.

The way Americans eat clearly needs to change. Enter Jamie Oliver's Food Revolution. The goal of the Food Revolution is to get people eating healthier foods. Some of the ways to achieve that goal include:

The Food Revolution site contains a petition and the reason for it is simple. By signing it you pledge to do the following: "I support the Food Revolution. Kids need better food at school and better health prospects. We need to keep cooking skills alive." Over 630,000 people have signed it. Will you join their ranks and sign as well?