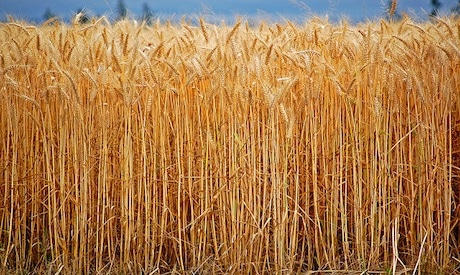 One of the few GMO crops not approved by the USDA-Monsanto's genetically modified Roundup Ready wheat-was found growing on an 80-acre farm in Oregon last month.

According to Bloomberg, the discovery was made when a farmer treating his wheat with Monsanto's popular Roundup herbicide noticed several of the plants survived the applications–as is common with Roundup Ready patented seeds.

After the USDA was notified, the agency identified the wheat as a strain that had been field tested between 1998 and 2005. Monsanto reportedly pulled the Roundup Ready wheat because of its potential to hurt exports to countries with strict regulations on GMOs, including Canada, Japan, the U.K. and Malaysia. The latest discovery is also expected to hurt exports-it already sent wheat futures for a 0.5 percent drop to $6.99 a bushel on Chicago's Board of Trade. Japan suspended U.S. wheat imports and the EU is expected to issue a recommendation to test all imports.

"I would imagine even the perception that GM wheat is out there would have some impact on our exports" with so many countries "putting their foot down on not accepting" gene-altered crops, Ryan Larsen, an assistant professor of agribusiness and applied economics at North Dakota State University in Fargo, told Bloomberg Businessweek. "This continues that bad persona that GM crops have. It allows people to say 'See, it's out there and we're not being told it's out there.' "

While the origins of the GMO wheat are as of yet unclear, government officials and Monsanto executives are tracking the seeds and are reassuring export partners that the exposure is limited. In a statement, Monsanto said, "Over the past decade, an annual average of 58 million acres of wheat have been planted in the U.S. This is the first report of the Roundup Ready trait being found out of place since Monsanto's commercial development program was discontinued nine years ago."

USDA acting deputy administrator Michael Firko said the agency is taking the issue "very seriously," and that there is a "very active investigation going on in several states in the western U.S."