Bread was a big part of our childhood. Toast with butter for breakfast, bakery-fresh bagels and croissants, sandwiches on white bread for lunch-some form of bread accompanied each meal. Whatever the shape or size, though, it was always white bread made with refined flour.

But over the past 30 years, bread has come a long way. As recently as 15 years ago, 80 percent of bread sold in the U.S. was white bread1. Today, it’s a much different story. We’re buying more whole grain bread and less white, and in 2010, for the first time, sales of whole wheat bread surpassed that of white bread-$2.6 billion compared with $2.5 billion2.

Thanks to education, availability, and improved labeling (like stamps and logos indicating healthier products), we are now more aware of bad ingredients in commercial bread. Whole grains have also, thus, become a top priority with consumers.

Read more about food labeling in the US & Canada

If you’ve ever made bread from scratch, you know that it’s made with simple ingredients: flour, water, yeast, and salt. Commercially-made bread, though, often includes a long list of toxic ingredients (some of which are on Naturally Savvy's Scary Seven™ list of foods to avoid). We will discuss the top commercial bread ingredients to avoid later in the article

As consumer awareness improves, commercial bread manufacturers are beginning to remove some dangerous ingredients from their breads, such as high-fructose corn syrup, and adding health-promoting ingredients such as ancient grains, omega-3 rich flaxseeds. Even so, while doing research for our latest e-book, Label Lessons: Unjunk Your Kids Lunchbox, we discovered that there are many hidden ingredients in bread (or in the ingredients used to make bread) that consumers don’t get to see since they are not clearly identified on food labels.

Don't Judge a Bread by its Color

Most of us are aware that it isn’t enough to buy bread based on color. Bread that is brown might simply be made with refined flour colored with caramel color or with some whole grain flour mixed in. When buying bread, the term, ‘100% whole wheat’ or ‘100% whole grain’ should be listed as the first ingredient. What does this mean? This indicates that all three parts of the whole grain kernel-the bran (the outer layer), the germ (the part that germinates), and the endosperm (the inside of the grain, which is mainly starch) are included.

Flour that is not whole grain is made with the endosperm only. The bran and germ are removed-and along with them, 70 percent of the nutrients (B vitamins, minerals, and all of the fiber). Removing the germ and milling flour extends the shelf life of bread products, delaying their rancidity. At this point, the flour is refined and unbleached. To make it white, it is bleached.

Although unbleached flour naturally whitens and softens over a 12-week period3, commercial bakeries prefer to use bleached flour, which ages in only 48 hours! Bleaching produces a brighter white color and improves the flour’s texture, making it more user-friendly. According to CooksIllustrated.com, “Typically, all-purpose flours are bleached with either benzoyl peroxide or chlorine gas.”4

The various chemicals used to bleach flour (oxidizing agents) may include:

But with the convenience come health hazards. Let’s take a closer look.

Benzoyl peroxide has a long history of use in the food industry as a bleaching agent added to flour, whey (specifically whey that has been colored using annatto), and milk for cheese making (mostly cheddar and Italian cheese). A premix of 32 percent benzoyl peroxide and 68 percent cornstarch (genetically modified cornstarch) is used in bleaching flour5.

In the U.S., benzoyl peroxide in food is considered GRAS (generally regarded as safe) when it’s used as a bleaching agent6, but both benzoyl and calcium peroxide have been banned in China and the E.U. In the E.U., benzoyl peroxide is banned for cosmetic use as well (the same stuff that’s used in acne creams and teeth-whitening kits).

If your motivation for buying whole grain bread is higher nutritional value, you might be surprised to learn that benzoyl peroxide is a powerful oxidant that destroys nutrients in flour, especially vitamin A and the B vitamins (which include folic acid). This is ironic, because those ‘in the know’ buy whole grain bread for B vitamins!

Benzoyl peroxide in food has been linked with liver problems7, and according to INCHEM’S (Chemical Safety from Intergovernmental Organizations) research, “the chemical possesses properties indicating hazards to human health (sensitization, effect on testes weight, fetal body weight and skin tumor promotion activity)” that should be further researched8.

For decades, chlorine has been added to our public drinking water and swimming pools, table salt, and is even found in certain food products (sucralose, for example). The use of chlorine to bleach flour is an industry standard, which means it’s likely used to make the flour in the bread, bagels, cake, cookies, croissants, donuts, cereals, pasta, and any other bleached and refined flour products that we buy. Most of us don’t question the long-term safety of chlorine exposure, but like the many other additives in our food supply, chlorine does have adverse affects on human health.

In flour-making, chlorine gas undergoes an oxidizing chemical reaction with some of the proteins in the flour, producing a by-product called alloxan. In the laboratory, alloxan is a chemical that scientists use to intentionally produce diabetes in healthy experimental animals. It causes diabetes by creating a large amount of free radicals to form in pancreatic beta cells–the cells that produce insulin – destroying them and causing diabetes9!

Unless the wheat flour and any flour products that you buy clearly state that they are unbleached, it is best to avoid any refined flour products, especially if there is diabetes in your family.

Perhaps the most dangerous ingredient used in bread-making, potassium bromate is used as a flour improver to strengthen dough and produce a higher rise in bread.

Potassium bromate in bread and other foods has been linked to damage of the kidneys and nervous system. The International Agency for Research on Cancer considers the chemical a possible carcinogen10, and it has been banned from use in food products in the EU, Canada, China, Nigeria, Brazil, South Korea, Sri Lanka, Peru and other countries.

Although the FDA strongly urges bread manufacturers to avoid using brominated flour, it is not banned in the U.S. (since its use was sanctioned prior to the Delaney clause of the Food, Drug and Cosmetic Act in 1958, which states: "the Secretary of the Food and Drug Administration shall not approve for use in food any chemical additive found to induce cancer in man, or, after tests, found to induce cancer in animals.")11. In California, products using brominated flour require a warning label. 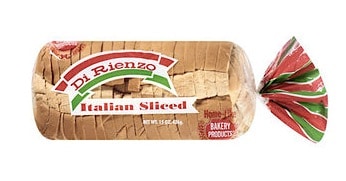 Azodicarbonamide is liberally used in bread in the U.S., where it is listed as GRAS and can be added to flour at levels up to 45 ppm, but it is banned as a food additive in Singapore, Australia and Europe, where it is considered to be a respiratory additive and a possible cause of asthma 12, 13, 14. For more on azodicarbonamide side effects read this article.

Azodicarbonamide is used both as a flour bleaching agent and as a flour strengthener, helping to make dough more elastic15. Since it is part of the flour making process, it is not always listed on food labels, but you can assume that it’s in most products made from white flour. That includes pasta, cookies, bagels, croissants, cereal, crackers, muffins, pastries, chapatti and more.

To avoid azodicarbonamide, purchase bread labeled 100 percent whole wheat that does not contain any added enriched flour, breads and flour-based foods made with organic flour, or gluten-free and wheat-free bread and pasta products. You can count on products from organic suppliers like Rudi’s Organic Bakery to produce azodicarbonamide free breads! 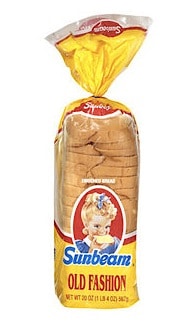 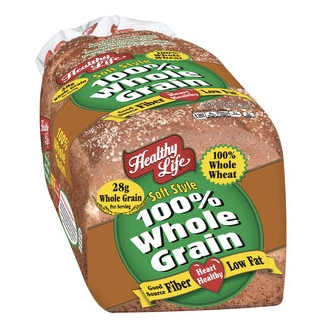 Ironically, because of the amount of whole grains in this bread, Healthy Life can claim that, “Healthy Life Soft Style 100% Whole Grain Bread is a good source of fiber, which can promote good digestive health and aid in weight loss efforts,” and that it is “heart healthy” and “may reduce the risk of heart disease and certain cancers.” This is very misleading, when the bread contains trans fats (as you’ll see below)-significant contributors to heart disease! Yet Healthy Life is also able to state that the product contains, “No trans or saturated fat; no artificial preservatives; no high fructose corn syrup;” and “no hydrogenated oils.”16 We’re not impressed. This product most certainly will not contribute to a ‘healthy life.’

Thanks to the addition of mono- and diglycerides and the dough conditioner DATEM, the ultimate bread-making short-cuts, processed breads don’t go stale as quickly as all-natural breads do, and when they’re added to dough, they make it possible to bake bread and bread products speedily without the usual efforts required in traditional bread making.

These inexpensive man-made fats have replaced the natural (and costlier) ingredients, lard and butter. By and large, they are by-products of fats and oils processing–including partial hydrogenation, a process that produces trans fats. The FDA requires labeling of trans fats, but only if a food contains more than 0.49 g per serving and only if it comes from triglycerides.

Because mono- and diglycerides are not triglycerides, food manufacturers use this as a loophole to use – and to hide – trans fats. Although they provide 9 calories per gram, they are not required to be included in the Total Fat or Calories on a Nutrition Facts label, and they are not identified as trans fats either!17. So even though the DATEM ingredient is considered toxic, you should it is still worth red-flagging if you are looking for the healthiest bread to buy.

We found mono- and diglycerides as well as DATEM in most of the breads we looked at, including this one from Sara Lee:

The most commonly-used of all commercial bread preservatives, calcium propionate, prevents mold and bacteria growth18. A study found that calcium propionate was linked with irritability, restlessness, inattention and sleep disturbance in some children19. Naturally, if you bake your own bread, you should want to add this preservative to the list of bread ingredients to avoid.

Natamycin is an antibiotic (antifungal) that is used in the food industry as a "natural" preservative. It is used in products such as cheese, sausage, cottage cheese, sour cream, yogurt and packaged salad mixes. While the European Food Safety Authority (EFSA) has concluded that the use of natamycin as a food additive has no relevant risk for the development of resistant fungi, there has not been sufficient research to identify whether or not natamycin alters bowel bacteria or whether it can contribute to antibiotic resistance. Why take a chance? If you see it listed on a food label, avoid it. 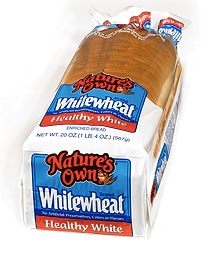 The food additive sodium stearoyl-2-lactylate (E 481, SSL) and calcium stearoyl-2-lactylate (E 482, CSL) are used as dough strengtheners in bread, waffle and pancake products. SSL is also used in icings, fillings, puddings, snack dips and cheese substitutes. CSL is sometimes used to replace fat in baked goods. Both SSL and CSL are used in various dairy-based spreads20. They have been deemed safe by most health organizations, including The Center for Science in the Public Interest; nonetheless, when purchasing baked products such as bread, choose a brand with the least amount of ingredients.

If health is your prime objective when buying food, purchasing bread made with 100 percent whole grain flour is an excellent improvement over refined and bleached flour products, but it isn’t enough. Here are some tips to keep in mind next time you're shopping for bread:

If you have any questions or comments, we would love to hear them. Please leave them in the comments below.

[Editor's Note: If you want to eliminate unhealthy ingredients and chemical additives from your diet for good, click here to sign up for a Naturally Savvy Get Healthy Challenge.