Potatoes are among the most ancient and basic foods, topping the list as the number one vegetable crop in the United States and the world. These tubers have been cultivated for as long as 10,000 years by the Indians living in the Andean mountain regions and today are often considered comfort food by people around the world.

For all of their history and nutritional and health benefits (which I will get to in a moment), some people on low-carb diets banish potatoes from their diets because the spuds are a source of carbohydrates. While limiting simple carbs is a wise choice for nearly everyone, it’s important to include complex carbohydrates in your diet on a daily basis since they are a major source of energy for the brain and body. In addition, complex carbs, unlike simple carbs, retain their nutrients, are a significant source of fiber, aid digestion, and are metabolized more slowly by the body.

Therefore, moderate consumption of potatoes is a nutritious dietary choice when you prepare them in a healthy way. In other words, skip the deep-fried potatoes and gobs of butter, sour cream, and cheese. Instead, enjoy them with the skin, grilled, baked, or mashed with pureed veggies and herbs. Delicious!

One small baked potato with skin provides 128 calories, 3 grams protein, 0 grams fat, 0 mg cholesterol, 3 grams fiber, and 29 grams carbohydrates. As an added bonus, potatoes contain the essential amino acid lysine, which is typically not found in other complex carb foods such as grains.

Now let’s dig into the health benefits of potatoes. Here are 9 great reasons to eat them: 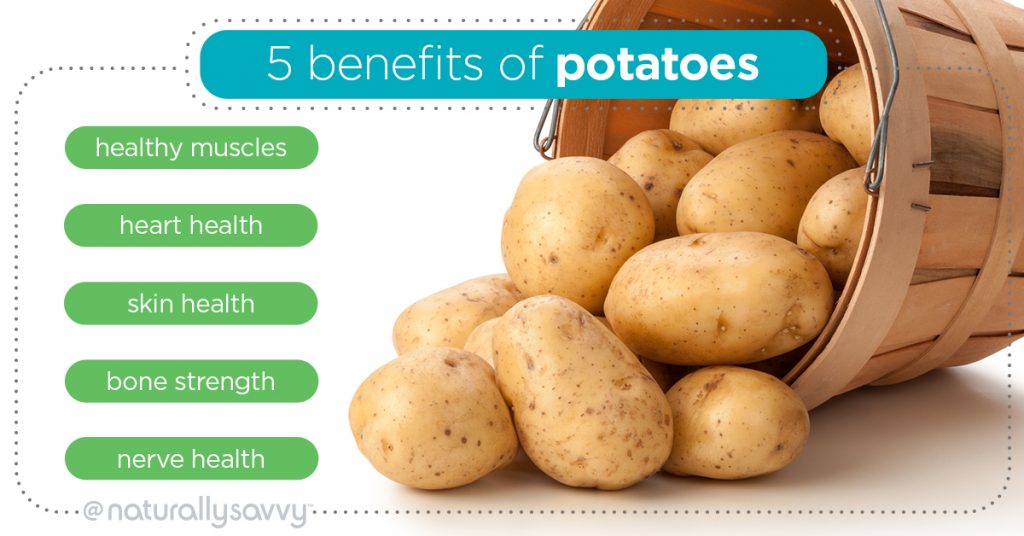 The answer to this question is clear. If you are familiar with the Environmental Working Group’s yearly report called the Dirty Dozen, you probably already know that potatoes, while not part of the dozen, are not far behind. In 2018, spuds were number 11 on the list and had the distinction of bearing more pesticides by weight than any other fruit or vegetable.

According to the USDA’s Pesticide Data Program, conventionally grown potatoes host 35 different pesticides, 6 of which are known or probable carcinogens, 12 are believed to disrupt hormones, 7 are neurotoxins, and 6 are associated with reproductive or developmental toxicity.

More than three-quarters of conventionally grown potatoes have a residue of chlorpropham, a honeybee killing herbicide that has caused dramatic health damage in laboratory animals. Conventionally grown potatoes not only absorb toxins that have been sprayed above ground; they also absorb them from the soil. Potatoes are sprayed during the growing season, before they are harvested, and once again after harvest to prevent them from sprouting.

Are you ready to enjoy delicious, nutritious baked, grilled, or mashed potatoes? Did I mention there are about 100 different varieties of edible potatoes from which to choose? Sounds like you have a lot of spuds to explore! Bon appetite!

Sign up for our newsletter and get new tips on eating well.