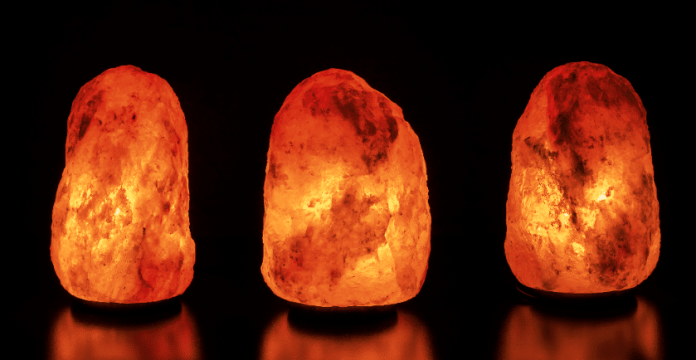 I have a friend who has had a Himalayan salt lamp in her home office for years. Since I don't have one, I asked her why she did and whether she thought it would be worth it for me to get one too. Her response was something like, "Well, it seems to make the energy in the room better…something about negative ions but I'm not really sure what they are or how the lamp works."

She's not alone. For those of us who have forgotten their high school science classes, here is a quick refresher on salt, ions, and electromagnetic fields, which can help us better understand the theory behind the Himalayan salt lamp.

First of all, true Himalayan salt is an extremely pure pinkish salt extracted from deep mines in Khewra, Pakistan. Each mineral-rich hunk of salt (which also harbors calcium, copper, iron, magnesium, and potassium) is hollowed out and a light bulb is placed inside, which triggers the salt's healing qualities. Salt, in general, has several basic qualities, including the ability to attract molecules of water from the surrounding environment, loosen mucus (thus the use of nasal saline and neti pots), and fight bacteria and inflammation.

As salt removes water from the air, it also gathers up pollen, pollutants, mold, and other airborne particles. A lit, heated Himalayan salt lamp attracts these water molecules and other substances and traps them in the lamp. Because the lamp is heated, the salt dries and retains the pollutants while emitting the water vapor.

Read about if your sea salt is contaminated with plastic

Where do the negative ions come in? If you are reading this article on your cell phone, laptop, or tablet, then you are exposed to unhealthy positive ions from electromagnetic radiation. Such ions also come from microwaves, overhead power lines, medical x-rays, and other sources. Scientists have been exploring the negative effects of exposure to such ions, which can include headaches, fatigue, and compromised immune function, as well as contribute to heart disease and other health problems.

Himalayan salt lamps reportedly release negative ions (which, ironically, have a positive impact on health) and help negate the positive ones. Negative ions can neutralize electromagnetic radiation and help improve the balance of negative and positive ions in your environment, similar to the way beneficial bacteria (probiotics) help balance the microorganism flora in your gut.

Read about the science behind electromagnetic fields

Although no scientific research has focused on the benefits of Himalayan salt lamps, anecdotal reports as well as evidence offered by studies of salt in general indicate that Himalayan salt lamps may be worth lighting up your life. In addition to the two aforementioned health benefits (e.g., improving air quality and eliminating airborne pollutants), here are several other health reasons to get a Himalayan salt lamp.

1. Improves mood. Although research is limited, there is some evidence that exposure to negative ions can improve mood and reduce depression. In a review and meta-analysis of 33 studies that evaluated the effects of air ionization on mood, depression, and anxiety, the Chicago-based researchers found that "Negative air ionization was associated with lower depression scores particularly at the highest exposure level."

2. Eases symptoms of allergy and asthma. Salt therapy (aka, halotherapy) is used to treat people who have respiratory conditions, such as asthma and chronic obstructive pulmonary disease, so it's not much of a stretch to see how Himalayan salt could also be helpful for allergy and asthma symptoms. In fact, Himalayan salt is used in some inhalers for asthma patients, and salt caves are found in spas.

3. Promotes a calming effect. In addition to the calming effect we may experience when gazing at a glowing Himalayan salt lamp, there is also the possibility that the negative ions can boost levels of serotonin in the bloodstream. Higher levels of this "happiness" hormone and neurotransmitter can relieve stress and anxiety, which can also translate into better sleep.

4. Increases energy levels. Negative ions are everywhere in nature, and it's been shown that spending time outdoors in nature enhances our energy levels. Positive ions, on the other hand, drain our energy. Therefore, exposure to Himalayan salt lamps may energize you.

For those who are considering buying a Himalayan salt lamp, it's a case of buyer beware. Fake lamps are everywhere, but if you are careful, you can be relatively assured of getting the real deal. Therefore, here are a few tips to help you determine a real versus a fake lamp.

Review the return policy. Although not an iron-clad rule, any company that has a "no return, no refund" policy is suspect. It takes some time-usually about a month or more-to determine whether you are getting any benefits from the lamp. Therefore, a reliable refund policy is a must.

Is it fragile or durable? This is a tricky feature, since a real Himalayan salt lamp should be somewhat fragile. If you were to drop your lamp, a real one would break or be significantly damaged, while a fake one might weather the trauma without a scratch. That's why it's important to not bump or drop your lamp.

How much light does it emit? Don't expect to get a lot of light from a real Himalayan salt lamp. If the lamp you bought lights up the room, that's suspicious, since the best you can expect from the real deal is a subdued glow.

Check the label. Real Himalayan salt lamps originate from underground mines in Khewra, Pakistan, which is the only known source of the pink salt. Check to see what the manufacturer says about the origin of the salt, and don't be fooled by a statement that the lamp was assembled in Pakistan.

Look for sweat. Real salt lamps sweat when they are exposed to moisture, so bring your lamp into the bathroom with you when you shower. A sweaty lamp is a good sign.

Is anything happening? If you have spent time with your lamp every day or nearly every day for a month and you have not experienced any benefits, then there's a chance you have a fake. However, perhaps your lamp is too small for your room. Generally, you need one pound of Himalayan salt for every 16 square feet of space. Therefore, a five pound lamp should be sufficient for a small office space of 90 square feet (or 10 x 9 ft).

Because a real Himalayan salt lamp is somewhat fragile, be sure to place it where it will not be subject to being knocked over by a child or an overzealous cat or dog. Also, prolonged exposure of the lamp to high humidity can cause the salt crystals to melt, which can be dangerous if the liquid leaks onto the lamp holder.

Should you get a Himalayan salt lamp? Will you experience rewarding health benefits from its pinkish glow? Although there is no hard science behind use of these lamps, associated research into salt therapy suggests they can be helpful, and there are many anecdotal reports of their benefits.