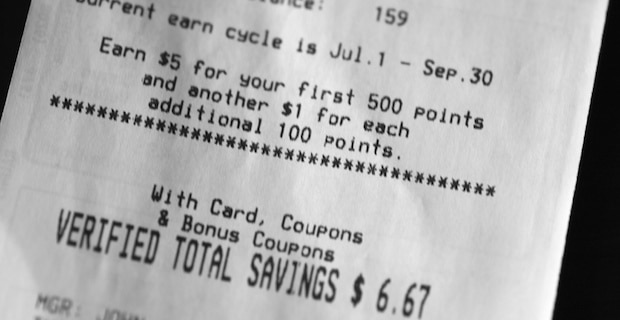 BPA (bisphenol-A) is that awfully nasty endocrine disrupting chemical in our food. It's in the cans and bottles many of our favorite foods come in. And it's also in those thermal register receipts. You know the kind. They're soft and don't quite feel like paper. That's because they're infused with this lovely chemical that's been banned or severely restricted in countries including Canada, France and China.

Read more about the worst endocrine disruptors in your body

Now, a new report has tested register receipts for BPA and you won't believe what the researchers have discovered. According to the report we received, out of 94 samples tested BPA was found in levels above the sample reporting limits in 27 of the samples.

Register receipts were obtained from 82 grocery stores in 12 chains found in 66 cities in 17 states.

Winn-Dixie, the grocery store chain popular in Southern states came in with the highest level of BPA concentrations above the sample reporting limits. All of the concentrations found on Winn Dixie receipts were above 1,000 mg. Ten Winn Dixie locations were sampled. Kroger and Safeway, the nation's two largest grocery chains, also tested positive for high levels of BPA.

What's most startling about this data is that especially in low doses, BPA is extremely dangerous. A potent endocrine disruptor, it's been shown to impact metabolic function, reproductive and developmental health, fertility and it's even been linked to autism and cancer.

Read more about environmental toxins that can decrease your fertility

If you want to avoid BPA-laced register receipts, simply don't take one from the cashier, or you can shop online or use rewards cards at stores (which track your spending) so your purchases are on record if you need to return items. In fact, most grocery stores won't even require a receipt for an inexpensive return. So do yourself a favor and ditch the receipts and the BPA.