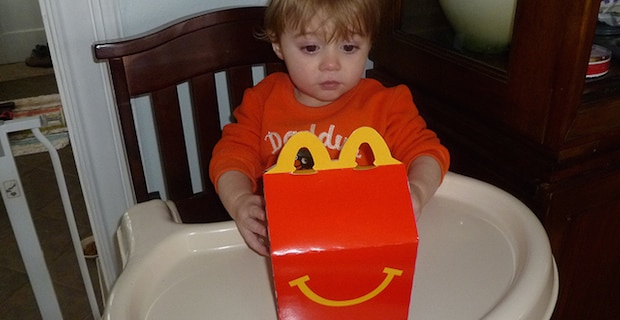 Childhood obesity is a big problem in the U.S. About 17 percent of American children and teens two to 19 years old are obese. Since 1980, the obesity rate among children and teens has almost tripled. Part of the reason for the increase in childhood obesity is the increase in junk food advertising targeting children. The food industry is stepping up its marketing to children, as a 2013 YouTube video, which is going viral all over again, by Food Mythbusters' Anna Lappe points out. Lappe finds what the food industry is doing to market to children "alarming."

Children are seeing a staggering amount of television ads. If a child watches a "typical amount of television," Lappe said, they will be seeing 4,600 commercials a year, and most of the advertisements are for "food that is high in fat, sugar and salt." The total amount spent on food marketing to children is about $10 billion a year and most of those ads are for junk food, according to the Center for Science in the Public Interest. About 80 percent of foods advertised on children's television shows are for convenience/fast foods and sweets. Fast food and sugary cereals are the most heavily advertised foods on children's television.

Just avoiding television advertisements won't work because junk food marketing to children and teens has become "nearly impossible to avoid," Lappe said. She cites several examples of how food companies are marketing their products to children in the classroom:

Food companies are targeting older children with online advertisements and text messages. About 70 percent of all teenagers are on some sort of social media network, and food companies are targeting them with ads. The Yale Rudd Center researchers found that fast food marketing through mobile devices and social media increased greatly during the three year period researched. Fast food restaurants placed six billion display ads on Facebook in 2012, 19 percent of all of their online display advertising. Dunkin' Donuts and Wendy's placed more than half of their online ads on Facebook.

Lappe ended her video on a high note by mentioning what is being done to stop food companies from marketing to children. On the state level, Maine became the first to pass a statewide ban on marketing junk food to children. Los Angeles put a moratorium on opening new fast food franchises in certain neighborhoods. Much more needs to be done because, as Lappe said, "We are talking about changing social norms." And we are talking about lengthening the lives of our nation's children.