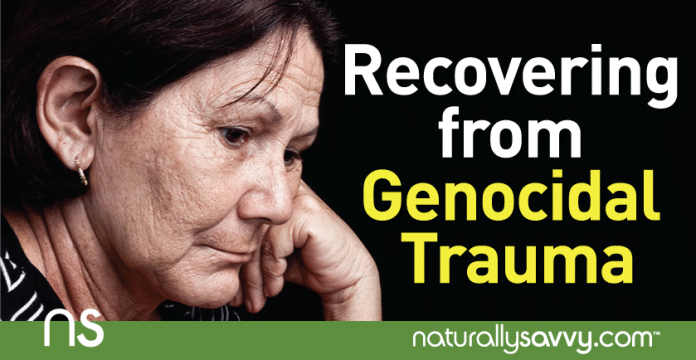 Andrea Donsky:   Hello everyone. Our guest, Myra Giberovitch, is a licensed Social Worker, Educator and Author of, Recovering from Genocidal Trauma: An Information and Practice Guide for Working with Holocaust Survivors. She started the first community based social service program for Holocaust survivors in Canada and is internationally recognized as a pioneer in this area. Welcome to the show Myra.

See below for Myra's Ted Talk:

Myra Giberovitch: Thanks for having me Andrea.

Andrea Donsky:   I'd love for you to tell our listeners a little bit about your background and how it led to your work with Holocaust survivors because it's super fascinating.

Myra Giberovitch:   I knew that working with Holocaust survivors was my calling. It's never been a career, it's always been a calling. I became a social work intern in the mid-1980s and I began to identify their unique needs. My life's work has its beginning in early childhood because I'm the daughter of survivor parents. Both my parents are survivors from the Lodz Ghetto in Auschwitz death camp. My mother was the only survivor from an extended family of eighty people. So my early childhood influenced me in choosing a career. As a young child I saw myself as an agent of change because my birth transformed my parents' lives. I know that it brought them joy because I symbolized their survivor and hope for the future.

Andrea Donsky: That's for sure, you helped them carry on their legacy.

Myra Giberovitch: Absolutely. I was born in a displaced person's camp in Bavaria after the war. I was the first child born in my parents' circle of friends. I remember growing up and my parents telling me that their greatest satisfaction, and that of their friends, was seeing lots of baby carriages in the camp because it symbolized hope and renewal. That's the legacy that you're talking about, the next generation. Helping people change and making a positive difference, this continues to inspire my passion today and has greatly influenced my work.

Andrea Donsky: I'm guessing that's what inspired you to write the book. Is this book for everybody? Is it for a certain population? Like specific people who are teaching and working holocaust survivors and with other victims of trauma I would guess.

Andrea Donsky: Can you please define what genocidal trauma means? We sometimes think it has to do with the Holocaust but there are other genocidal traumas that have occurred as well.

Myra Giberovitch: Exactly. What we are talking about today, the term in the literature is called "Mass Atrocity Crime." And by Mass Atrocity Crimes we're talking about genocide, we're talking about crimes against humanity … ethnic cleansing. We know that there are genocides and these types of traumatic events that continue until this day. My book describes service models, it describes a philosophy in working with Holocaust survivors that is applicable to these different populations. The important thing about my book is that it gives hope to individuals that recovery is possible.

Myra Giberovitch: Absolutely. What makes my book unique is that it provides a very fresh perspective for understanding and interacting with survivors. So one of the things that makes it unique is its strength-based approach. So what do I mean by a strength-based approach? It's a philosophy that is guided by the values and principals of social work. So it emphases that individuals have strength, that they're resilient and survivors demonstrated that, beginning in the displaced persons camps of Europe at the end of the war where they were highly motivated to rebuild their lives.

Myra Giberovitch: Exactly. And the literature in the post war years very much focused on the ways in which they had been scarred. It focused on their disabilities or the pathology. It didn't recognize their adaptation and resilience. My master's research identified their contributions to the Montreal Jewish Community that include Jewish education and contributions to the cultural and institutional development of the city. This is something that's important to recognize but at the same time, not losing site of what their vulnerabilities are because they have been affected by their traumatic events and we can't deny that. But I think that we need to acknowledge their resiliency, their strength and their adaptation without losing site of their vulnerabilities.

Andrea Donsky: I think that's a very good point. It definitely shows the positive side of it, which I guess the silver lining, right? I mean I think that's what's important to focus on.

Myra Giberovitch: There are two sub-groups; there's the older survivor and they're eighty-five years of age and older. Then there are the child survivors which means that they were children during the war or sixteen years of age or young in 1945. Aging is having its effect on Holocaust survivors. So for example, the losses associated with the aging process is forcing them to approach communities for help and many for the first time. They are a fiercely independent group of individuals.

Myra Giberovitch: So for example some of the losses of aging is the death of a family member, a spouse, for example. Their loss of autonomy, illness, having to move out of their present home and having to relocate their residence.

Andrea Donsky: These are events that are sparking memories.

Myra Giberovitch: Exactly. And it can remind them of their war experiences. So their past experience,  particularly for people who have a touch of dementia, may reverberate in the presence and sometimes it merges into one. So everyday sights and sounds for examples may trigger a traumatic memory. Sometimes this results in baffling behavior. So for example, survivors may refuse to take a shower, afraid that they will be gassed. Also they may become anxious or angry when lining up for food. Trains, crowds, dogs, may trigger painful memories that require understanding and a compassionate response. So that's an area that I cover in great detail in my book.

Andrea Donsky: Unfortunately we're out of time for today, but I'd love to have you come back on and talk a little bit as well as the holistic approach you take with the survivors in your special service. I love what you do, and the approach that you take. Thank you for being on our show today.

Myra Giberovitch: My pleasure, thank you so much for having me. I'd be very happy to come back and talk about a holistic approach to a well-being.

Andrea Donsky: You can learn more about Myra at MyraGiberovitch.com. I'm Andrea Donsky this is Naturally Savvy Radio on RadioMD. Like us on Facebook and follow us on Twitter @yourradiomd and @naturallysavvy. Thanks for listening everyone, stay well.