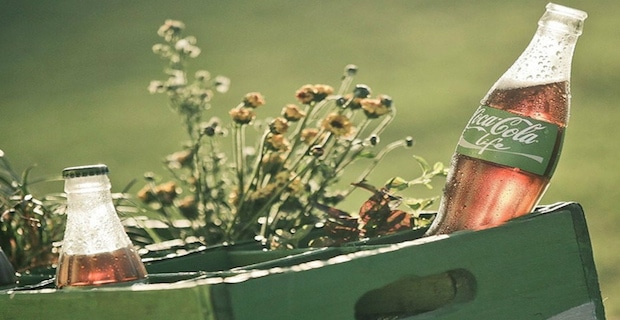 Things are heating up in the soda wars. If you haven’t seen the news, both Coca-Cola and Pepsico are releasing ‘mid-calorie’ stevia sodas (as if we should still consider their regular ultra high calorie drinks a viable option). The move is undoubtedly an attempt to regain consumers who’ve ditched their soda habits either in an effort to avoid HFCS or artificial sweeteners. Both are dangerous. And these new sodas that are being promoted as healthy alternatives, really aren’t much better.

Read more about the trouble with soda

Coca-Cola is packing its Coca-Cola ‘Life’ beverage with a green label to conjure imagery of a healthier, safer drink. Pepsi’s ‘True’ also comes in a natural green tone. These stevia sodas are using the zero-calorie plant sweetener that’s a healthy alternative to artificial sweeteners. But there’s something both of these soda leaders aren’t telling you: the sodas aren’t healthy. Not by a long shot.

The ingredients, while noticeably absent in high fructose corn syrup or aspartame, still include sugar, yet both brands aren’t talking about that. They’re waxing on about the miracle sweetener that stevia is, yet according to the Wire, Coca-Cola’s product contains “four teaspoons of sugar per can. That is 25 percent of the daily recommended sugar intake for children.”

Pepsi’s True doesn’t fare much better. It’s only a 30 percent reduction in sugar from its regular soda containing 16 grams of sugar per serving.

So why aren’t the brands talking about the fact that there’s still processed white sugar (and mostly likely it’s GMO beet sugar) in these sodas? When sugar is mentioned, it’s touted as a natural ingredient-“pure” sugar. Which is a little bit like saying “pure cocaine.” It’s still really bad to put in your body. We can applaud the companies for taking these teensy baby steps in the right direction, but it’s clear there’s still a long, long way to go.

Read more about kicking the sugar habit for good