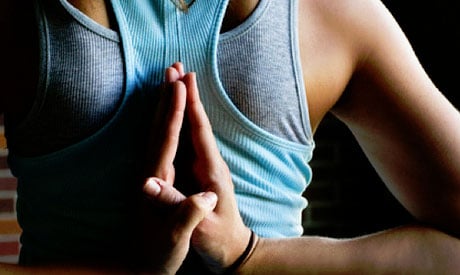 The physical practice of yoga is one of eight parts of a total system, the goal of which is enlightenment  (i.e., transcending all “thought” to connect with the “self” – a universal state of being that exists beyond thought). The eight “limbs” of yoga were codified in the Sanskrit language in the Yoga Sutras of Patanjali.

We tend to associate “yoga” with a physical practice, and indeed, the physical practice (“Asana”) is one of the eight limbs. However, it is neither the first nor the second. Asana comes third, after the “Yamas” and the “Niyamas”, which together form a set of recommendations on how to minimize any obstacles that may arise along the path to enlightenment.  The “Yamas”  are five practices of self-restraint consisting of non-harm, non-lying, non-stealing, non-wasting of energy and non-coveting. The “Niyamas” are five affirmative practices consisting of cleanliness, contentment, discipline, self-study and surrender.

A discussion of the first Yama – non-harm (“Ahimsa”) – can be found here. A discussion of the second Yama – non-lying (“Satya”), can be found here. The third Yama is the practice of non-stealing, also known as “Asteya”.  Asteya is described in Sutra 2.37, which states that the establishment of a strong practice of non-stealing results in the availability of all “ratna”.  While “ratna” has been defined in a variety of ways, including  “riches”, “pearls”, “gemstones”, “wealth” and even “water”,  each definition can ultimately be interpreted as “that which is valued”.  In other words, the principle of Asteya is that once we cease grasping at that which is not ours, all that is of value will become available to us.

So, does this mean Patanjali was holding out the promise that in exchange for not stealing, we shall be rewarded with whatever riches we happen to value?  Certainly, when we seek things out through non-crooked means, we place ourselves in a better position to attain and retain them. Nevertheless, Sutra 2.37 seems to be saying much more than that. Practicing non-stealing is intrinsically intertwined with practicing the other Yamas (non-harming, non-lying, non-coveting and non-wasting of energy).  The practice of non-stealing also contributes to the practice of the Niyamas by maintaining our purity, by requiring our discipline, by requiring us to surrender to whatever a higher power has in store for us and by demanding that we ask ourselves difficult questions about ourselves and then answer those questions honestly.

Those difficult questions will invariably touch upon variations of “who am I?”, “what is mine?” and “what do I want?”  When we ask ourselves those questions in the context of the other Yamas and Niyamas, we may well find that each question has the same answer, and that answer is: The self, that universal state of being that exists beyond thought, beyond desire, beyond action, beyond reaction. Thus, rather than promising us riches that never belonged to us in the first place, Sutra 2.37 seems to promise that when we cease grasping at that which does not belong to us, we can find the value in what is already ours.

What ways can you practice non-stealing on the mat?  Tell us in the comments!