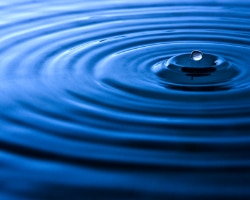 From caskets made of recycled matter to not using embalming chemicals that leech into the earth, people are progressively searching for traditions to make their final resting place a more environmentally affable one.

It has been a long-held belief that cremation is a very green choice. Although cremation uses far fewer resources than almost any other disposition option, it also has an environmental impact and "carbon footprint." So is cremation really an eco-friendly form of disposition?

According to the Green Burial Council, cremation burns fossil fuel and some older cremation facilities can use significantly more energy compared to newer ones. Mercury is also emitted when a person with dental amalgam fillings is cremated, though just how much mercury is widely debated.

So what choice does a greenie have who really does not want to be put in the ground? A little-known method is on the rise and scratching the surface of the U.S. market—water resomation. Rather than cremation with fire, water dissolves dead bodies in an environmentally friendly way through alkaline hydrolysis, a process involving a combination of water pressure, heat, and alkalinity (acid neutralization) that is more familiarly known as bio-cremation or aquafication.

Water resomation accelerates the natural disintegration process through alkaline hydrolysis, sympathetically returning the body to ash. Unlike cremation, it produces a natural, contaminant-free byproduct. This is an environmentally sustainable development—and the bio-responsible option.

In alkaline hydrolysis, an individual body is gently placed in water in a stainless steel chamber. Heat, pressure, and potassium hydroxide are added to dissolve the tissue. The corpse is placed in a stainless steel pressurized tube that is then filled with the key ingredients and heated to 330 degrees. After a few hours, all that remains is the skeleton, so soft that it can be ground into ash by hand. The process results in a non-harmful sterile liquid that can be disposed of at a water treatment plant.

The entire process is complete in about the same time as fire-based cremation, regardless of the size of the body. Pacemakers can be left in place and titanium implants can be recovered—intact and sterile.

The process's biggest draw, supporters say, is the environmental impact: The stainless steel cylinder that processes the body uses less energy to operate and produces far fewer pollutants than cremation by incineration. There's no worry that embalming fluid will further harm the earth. Neither will harmful mercury fillings, which can easily be plucked from teeth and disposed of in an environmentally safe way.

Since 2002, the world-renowned Mayo Clinic in Minnesota has used alkaline hydrolysis to dispose of about 500 bodies that had been donated for medical research. Next of kin are given the option of choosing other means of disposal, and only one family has asked for a more traditional cremation by fire, according to Terry Regnier, the clinic's director of anatomical services.

"Our bodies are largely water anyway, and it's kind of a natural process to turn us back into what we're made of," Regnier said. "The public is looking for a greener way to handle their final dispositions."

Regnier said he personally would prefer alkaline hydrolysis to fire cremation. "I wouldn't hesitate for a second," he said. "I'd have any member of my family do it, too."

Bio-cremation is legal in Minnesota, Maine, Florida, and Oregon, with Florida the early adopter stateside. The Sunshine State's first commercial bio-cremation facility in St. Petersburg has yet to become operational.

Canada has not yet legalized this water-based method of disposition, but this benign process of alkaline hydrolysis already appears to have received at least a tentative endorsement from Roman Catholic scholars. A 2008 National Catholic Bioethics Quarterly analysis argued that "like cremation, alkaline hydrolysis could qualify 'in cases of necessity' as the moral alternative to Christian burial."

Bio-cremation could become widespread once it is understood by funeral directors and their clients. If you give a consumer a choice of water versus fire, they will pick water nine times out of 10. It's perceived as a more sympathetic process than being burned. It's more dignified.