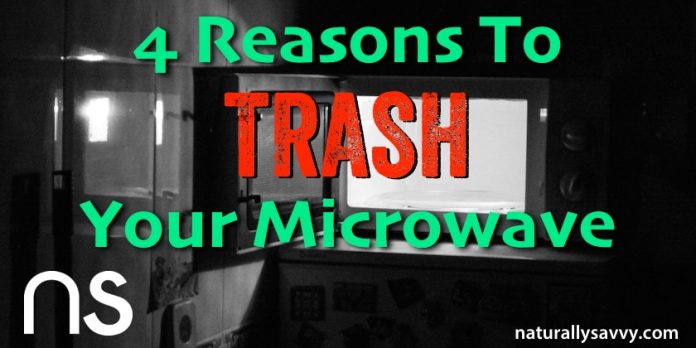 I remember when my family came to my house for Thanksgiving about five years ago and were astounded to find out that I didn’t have a microwave. In fact, when I later went to visit my brother, he packed an unused microwave in the trunk of my car and insisted I take it. The microwave was then promptly stored in the garage for years to come.

I initially quit using microwaves after a former boss (admittedly paranoid dude) told me about the dangers of a microwave and said that he wouldn’t come within a football field of the contraption. That’s when I decided to take a closer look.

Why I Don’t Use a Microwave

1.  Taste: The main, most notable reason that I don’t use a microwave is taste. I’m a foodie that buys high quality, local and artisan ingredients. I’m not about to heat up my pride and joy in a microwave. I think microwaves actually have the innate ability to make unprocessed foods taste processed. Bottom line-if taste matters, the microwave is out.

2.  Toxic Compounds: If you are going to use your microwave it’s exceedingly important that you don’t heat foods up in plastic. Heating up plastic has been found to release toxic doses of BPA. In fact, the amounts of BPA detected caused neurological and developmental problems in lab animals. Other toxic compounds emitted included polyethylene (PET), benzene, toluene, and xylene.

3. Nutrient Depletion: One article on GreenMedInfo showed just how dramatically nutrients can be depleted when you use a microwave to heat them up.

If you’re going to the trouble to eat healthy, why not go the extra step and steam, roast, or sauté your harvest bounty to get the most nutritional bang for your buck?

Here’s my take: You’d have to use your microwave quite a bit to have to worry about radiation risks, but make no mistake that microwaves do emit radiation. That’s why you should stand as far away as possible when you’re heating foods up.

But even without radiation, taste, toxic leakage, and nutrient depletion convinced me to chuck my microwave.