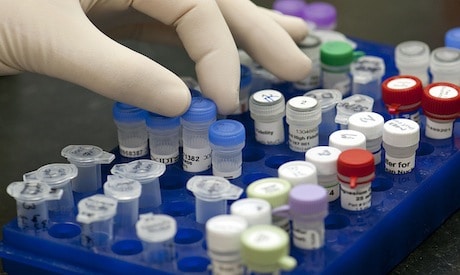 The Supreme Court is reviewing a case of gene patents, which the biotech industry argues is vital to innovations in medicine and biotechnology. Opposing the right to patent genes is the American Civil Liberties Union, which argues that human gene sequencing should never be eligible for patenting. The ACLU cites the "product of nature" doctrine, which bars anything created by Mother Nature from being patented.

But Myriad Genetics argues that the patenting of genome sequencing should be legal because, "they do not exist in isolation inside the body," reports the Los Angeles Times. The company points to the tireless work involved in understanding sequences (notably, where they begin and end) and how to identify what's most medically useful. They say it's an investment worthy of protection and profit via patent rights.

In oral arguments heard on Monday, April 15th, the Justices were divided, reports the Times: "The example used by Justices Stephen G. Breyer and Elena Kagan was that of an explorer who discovers a plant in the Amazon rain forest that has medicinal properties. They questioned why, if a gene extracted from the body could be patented, why not a plant extracted from South America? Or a chromosome, or a piece of the liver?" Justice Breyer said, "[S]o when Captain Furneaux goes to the Amazon and discovers 50 new types of plants, saps and medicines, discovers them, although that expedition was expensive, although nobody had found it before, he can't get a patent on the thing itself. He gets a patent on the process, on the use of the thing, but not the thing itself."

Myriad Genetics' lawyer argued that one of the patents in question, a segment of DNA that can help determine whether or not a woman is at risk for certain types of ovarian or breast cancer, is "patentable" because it is being utilized to assess a specific risk.

The Justices showed concern over the financial incentives patents bring, questioning whether or not companies would do the research if they weren't being guaranteed patent rights.

The Obama administration proffered a meeting point, suggesting the Supreme Court uphold that companies not be allowed to patent human genes outright, but can patent "complementary DNA chains" created when isolating DNA sequences. But the issue remains contentious, one that the Times suggests could lead to "a potential split among the justices."