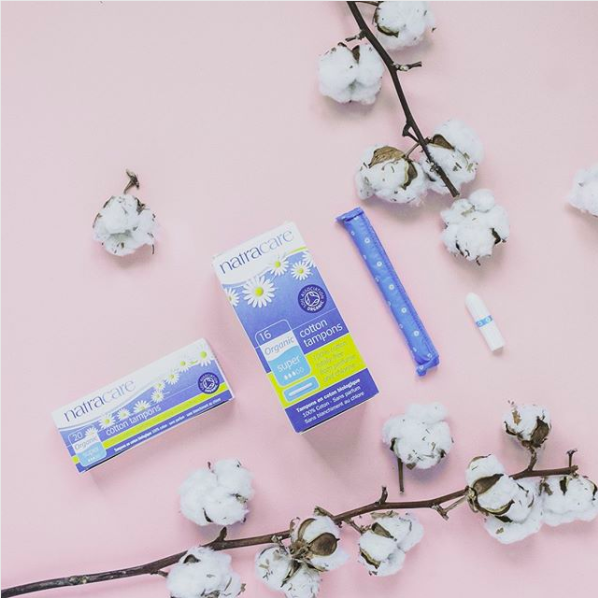 If we made a cake to celebrate the organic cotton tampon, would we use tampons as candles and light the strings? One thing for sure: nothing toxic would be released from these natural lights!

In 1989, the women's feminine product industry saw the birth and introduction of the organic cotton tampon. The entrance of this tampon to the market was about much more than just a new product. It was a statement of strength from women, wanting to take control over what they put in their bodies.

The organic cotton tampon was an alternative for women from the disposable menstruation products that were available on the market at that time and made largely from synthetic materials and undisclosed ingredients identified by women's groups and environmental groups as chemicals of concern. It was the beginning of a quiet revolution that quickly grew in volume and continues to this day.

The woman behind this revolution was Susie Hewson, the founder of Natracare. Not only did she help bring safer sanitary products to market to protect women's health; she also raised awareness of the devastating impact of plastics on the ecosystem. She has fought long and hard to raise awareness of dioxin pollution, dyes, fragrances, lubricants and synthetics readily used in conventional sanitary products.

A brief history of period products

The story of women's sanitary products has a somewhat bloody (couldn't resist!) history. Although we're not exactly sure how our prehistoric ancestors handled menstruation, women in the Middle Ages likely used rags to soak up menstrual blood. Around 1880 or so, there is mention in the British Medical Journal of something that resembles a tampon. Nearly a decade later, the first commercially available disposable menstrual pads appeared on the market.

The first commercially available tampon made its appearance just before the Great Depression in 1929. More than four decades later, sanitary napkins with adhesive strips were readily available in the United States.

Read about sanitary pads and tampons: a history

Conventional tampons can expose women to potentially harmful ingredients.  Tampons make intimate contact with vaginal tissue, which was designed to be self-cleaning. Placing synthetic chemicals and materials in contact with these tissues can disrupt this natural process. One potentially lethal problem is toxic shock syndrome (TSS).

Toxic shock syndrome is a rare, potentially deadly condition that affects less than 500 women per 100,000. There is the possibility that 40 women per year may die from TSS. TSS is a complication of specific bacterial infections, especially from the toxins produced by Staphylococcus aureus bacteria.

Although toxic shock syndrome is typically associated with the use of super-absorbent tampons and those made with synthetic fibers like rayon, it also can develop in men, postmenopausal women, and children. That's because other causes of toxic shock syndrome can include the presence of skin wounds, viral infections, and surgery.

One of the best ways to prevent toxic shock syndrome is to change your tampon every four to six hours and use 100% cotton tampons. Use pads at night, use the lowest absorbency to accommodate your flow, and also, wash your hands before inserting a tampon.

Feminine hygiene products are regulated as medical devices which means a manufacturer is not required to put an ingredients label on their packages. Although many conventional products now either identify their ingredient on the package or on their website, there are still some ingredients that are potentially harmful substances. Some of these ingredients include:

Chlorine. Because natural cotton is not pure white, some tampons are bleached with chlorine. Bleaching is used to also get rid of impurities in the fibers. However, one toxic side effect of chlorine is that it can break down into dioxin, a highly toxic chemical.

Rayon. Many conventional tampons are made of a manmade fabric that is a mixture of cotton, rayon (a cellulose fiber that is derived from wood pulp), and other synthetic fibers. When the fibers are bleached, dioxin is released.

Read more about rayon: what you need to know about this fiber and your health

Pesticides. Tampons that are made from a blend of cotton have the potential to be harmful because pesticides can be found in these sanitary products. (Unfortunately, cotton is one of the most heavily sprayed crops.) In 2018, the national women's health nonprofit, Women's Voices for Earth, released the results of an independent product-testing venture. The test results showed that carbon disulfide, a recognized reproductive toxin, was found in four tampon brands that contain rayon. In addition, other tampon brands contained the reproductive toxins toluene and xylene and the cancer-causing substance, methylene chloride. None of these substances were listed on the labels by the manufacturers.

Fragrance. Many manufacturers used artificial scents to neutralize or mask smells arising from used tampons. These fragrances consist of a mixture of chemicals, including hormone disruptors, and can be harmful to your health.

Plastics. Some tampons are encased in plastic applicators while others are wrapped in individual plastic covers and some contain synthetic plastic fibers mixed with cotton. These plastics are typically made using the same compounds found in plastic bags—petroleum-based polypropylene or polyethylene to protect them from moisture. Note: Natracare non-applicator tampons are wrapped in polypropylene. The recycling code is 5. Unfortunately, paper or other biodegradable type materials would not keep the tampon compressed or free from moisture, therefore it would leave the potential for bacterial invasion. Again, if it was possible to change and viable, Natracare would always choose to use a biodegradable wrapper and they continue to explore the possibility. The best option now is to be sure and recycle the small amount of plastic that the tampons are wrapped in.

When the organic cotton tampon was introduced in 1989, it was a shot that should have been heard around the world. Hewson's message to the world at the time was that the conventional tampons on the market were chlorine bleached and used synthetic viscose rayon, substances that are not vagina-friendly or eco-friendly! People were resistant to the message at the time potentially because it was quite shocking and something they had no awareness around or had even thought of.

In 1994, Philip Tierno and Bruce Hana published "Propensity of tampons and barrier contraceptives to amplify Staphylococcus aureus toxic shock syndrome Toxin 1," which talked about how the use of tampons could promote the development of toxic shock syndrome associated with the S. aureus bacteria. Although this article didn't gain the attention of the general public, the front-page article in the Village Voice several months later did. Called "Pulling the plug on the sanitary protection industry," it let people know the government was not regulating the use of organochlorines (the chlorine bleaching or whitening chemicals) used in the production of tampons.

That Village Voice article appeared in 1995. Hewson and others have continued the fight to bring safer sanitary pads and tampons to women and make manufacturers accountable for the materials they use in their products.

Why organic cotton tampons are better

Now that you are more aware of why choosing an organic cotton tampon is better for your sensitive vaginal tissue, some of the deceptive practices of the conventional feminine hygiene industry, and the environmental impacts of synthetic fibers and plastic, choosing an organic cotton tampon is the best choice for you and the planet. Happy Birthday to Natracare and thank you to Susie for shaking up the feminine hygiene industry.

Sign up for our newsletter to receive our latest articles to your inbox.

Bushak L. A brief history of the menstrual period: how women dealt with their cycles throughout the ages. Medical Daily 2016 May 23