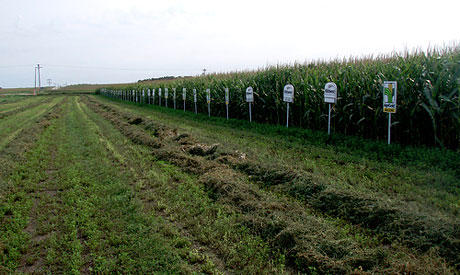 The Environmental Protection Agency is charged with protecting the air, soil, and water. But, when it comes to exposure to a toxic herbicide, the EPA is shirking its duty. The EPA published a final rule in May that increases the limits for glyphosate exposure to 100 parts per million (ppm) in crops grown for animal feed, and 40 ppm in oilseed crops.

According to the nonprofit Beyond Pesticides, some of the allowable limits for glyphosate will double under the new rule. Glyphosate, a main component in Monsanto's Roundup herbicide, is sprayed on millions of acres of crops throughout the U.S. that are genetically modified to tolerate the herbicide. This includes the most common GMO crops: corn, soy, sugar beets and canola.

There are many other studies which found serious health problems associated with glyphosate exposure, including a French study led by French professor, Gilles-Eric Seralini. Seralini and colleagues looked at the health effects of glyphosate-tolerant maize fed to rats. They found that females fed the GMO maize died two to three times more quickly than those not fed it, developed large mammary tumors, and their hormonal balance was "modified." Male rats fed GMO maize had liver problems at a rate of 2.5 to 5.5 times higher those not fed the GMO maize, developed four times more large tumors, and had kidney problems.

Given the studies on glyphosate exposure, it seems surprising that the EPA would increase exposure limits. However, as the Cornucopia Institute points out, the EPA relies on studies supplied by the agricultural giant, Monsanto which creates both GMO crops and glyphosate.

"The EPA must consider independent and recent science rather than depending on industry-funded, outdated studies supplied by Monsanto," the Cornucopia Institute stated. Indeed it should.

Read more about the fight against Monsanto