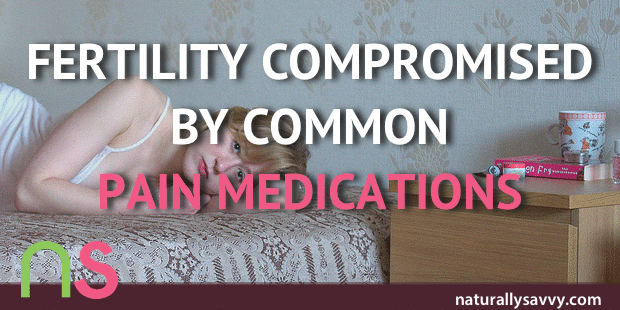 Young women who are having difficulty getting pregnant may have the reason sitting in their medicine chest. The findings of a new study suggest That regular use of nonsteroidal anti-inflammatory drugs (NSAIDs) by women of childbearing age may have a negative impact on their fertility.

Women who are having problems with fertility can be facing a wide range of issues. Causes of infertility in females can include polycystic ovary syndrome (PCOS), hypothalamic dysfunction, premature ovarian insufficiency, endometriosis, damage to the fallopian tubes (from infections or surgery), benign polyps or tumors of the uterus or cervix, or uterine or cervical abnormalities. Frequently, the cause of infertility is not known.

Read about 6 environmental toxins that can affect fertility

Perhaps one of those unknown causes is the use of NSAIDs, some of which are available over the counter. The study results were presented at the European League against Rheumatism Congress 2015 in Rome by Sami Salman, MD, from the University of Baghdad.

To arrive at their findings, a research team evaluated 39 women of childbearing age who suffered with minor back pain. Before the women started the study treatment, they underwent an ultrasound to document the size of their ovaries and measurement of their progesterone levels, a hormone necessary for ovulation.

The participants were given one of four treatments: placebo or the NSAIDs diclofenac (by prescription), etoricoxib (not FDA-approved in the US), or naproxen. Treatment began on day 10 of their menstrual cycle, which ensured a follicle had developed so it could release an egg when a woman ovulated.

After 10 days of treatment, all the women underwent another ultrasound. Here's what the researchers found:

The return of ovulation after stopping use of the NSAIDs indicates that the effect of the medications on fertility is reversible. However, as Salman pointed out, "these findings highlight the harmful effects NSAIDs may have on fertility." When it comes to using these pain relievers, timing may mean a lot to young women who want to become pregnant.

Read more about GMOs and infertility

Regular use of NSAIDs is more common among older adults for conditions such as arthritis, bursitis, tendinitis, and other inflammatory conditions. However, regular use of such pain relievers is not uncommon among younger women. Therefore, women who are having difficulty getting pregnant and who are using NSAIDs routinely should talk to their doctor about finding alternative ways to manage their pain.