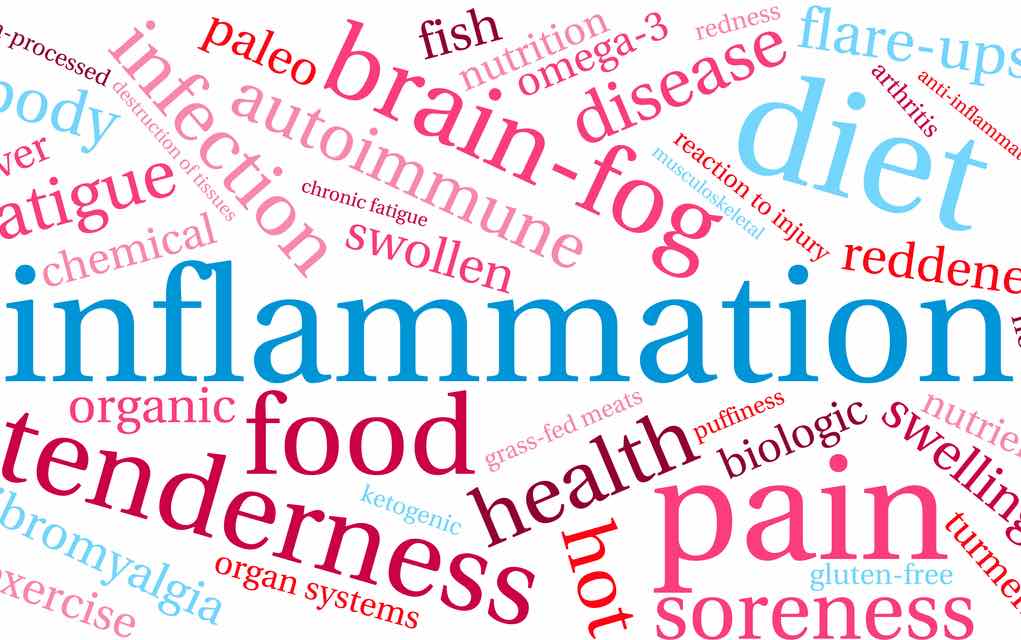 Recently a group of researchers reported that inflammation messes with how people behave and is associated with impulsivity, difficulty focusing, and an inability to delay gratification (as in "I gotta have that doughnut now"). How is it possible for there to be a relationship between inflammation and behavior?

Inflammation is a natural process that wears two hats. Its good guy hat is involved in defending your body against invasion by bacteria, viruses, and other pathogens or traumas such as cuts or falls. For example, if you cut your finger, your immune system kicks in. The damaged tissue releases substances that result in inflammation and triggers the immune system to block off the injured area, kill any invading organisms that may cause infection, get rid of the damaged tissue, and begin the healing process. As healing progresses, inflammation goes away.

Read about how to recognize inflammation in your body

Chronic inflammation, however, wears the bad guy hat and is a different scenario. It is a sign that your body is out of balance, and it is associated with scores of health problems and diseases ranging from headaches and heart disease to arthritis and digestive problems.

Deep-seated systemic inflammation can have many causes and contributors, most of which are linked to lifestyle. At the top of the list is a poor diet (processed, refined foods, sugars and unhealthy fats). Other factors include lack of exercise, chronic stress, insufficient sleep, alcohol and tobacco use, and food allergies. Fortunately, all of these can be modified.

A group of researchers at Texas Christian University recently published a report suggesting that "inflammation may contribute to decision-making patterns that can result in undesirable personal and societal outcomes." Put another way, inflammation seems to have an impact on how the mind makes decisions, resulting in behaviors such as impulsivity, engaging in risky behaviors such as drug use or drinking, or difficulty staying focused on activities.

Prior to this research, there's been evidence that inflammation promotes psychological changes that can increase a person's sensitivity to changes in their environment. For example, it seems that inflammation may have an effect on a negative experience, such as being rejected by others. However, it also may impact our positive encounters, such as receiving social support.

In the new study, the authors hypothesized that inflammation would be associated with more immediate gratification. They tested this idea by looking at the relationship between inflammation and current-focused decision-making among 159 young adults (80 men, 79 women) who were told to abstain from sex, alcohol, and smoking for 48 hours before testing.

The relationship between the levels of the inflammatory substances were compared against behavioral factors, which included temporal focus, self-reported impulsivity, and self-reported inability to delay gratification.

Overall, the authors found that inflammation, even low levels in healthy people, can impact our decision-making choices, causing more impulsivity, trouble focusing on the task at hand, and delaying gratification. The experts noted that these results "suggest that the activities of the immune system may plan an important role in shaping decision-making preferences."

The findings are important because they provide new insight into how inflammation has an impact on our behavior, which in turn suggests new ways to manage and treat social and health problems by targeting inflammation.

How you can reduce inflammation

Fortunately, there are several lifestyle changes you can initiate right now to help lower inflammation in the body and begin feeling better!

Inflammation appears to have a significant impact on our decision-making skills which, in turn, can have a big effect on how we behave and our interactions with others. Although much more research is needed to understand the relationship between inflammation and behavior, in the meantime everyone can take steps to reduce inflammation in their lives by adopting some general lifestyle guidelines.

We are always looking for the latest research on health. Subscribe to be on the cutting edge of all things healthy living:

Read this next: How To Recognize Inflammation in Your Body

Inagaki T et al. The role of the ventral striatum in inflammatory-induced approach toward support figures. Brain, Behavior and Immunity 2015; 44:247-52

Can Quercetin Boost Your Immunity?

Dr. David Katz MD I What You Need to Know About The Virus Pandemic & Your Health