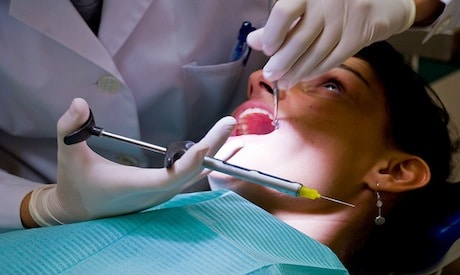 Mercury is a potent neurotoxin. In fact, it’s flat out poison. Over the past decade we’ve heard lots of talk about mercury poisoning, the symptoms of which include feeling weak, tired, having muscular pain, twitches, insomnia, depression, anxiety, and problems concentrating. We’ve been told to watch our intake of tuna and sushi, and to avoid contact with coal fire plants. Burning coal is the largest human source of mercury, an element of the Earth’s crust that’s dangerous when released into the environment. But what if a major source of mercury was actually in your mouth?

Mercury amalgam fillings have been used to fill cavities for the past 150 years. The filings have a silver appearance but they’re actually made with 50 percent mercury and various other metals. They’ve been used for ages because they’re inexpensive, versatile, and they last a long time before needing to be replaced.

The jury is still out as to whether they cause health problems. Mercury is of course toxic, but the release from your fillings is very slow, according to Dr. Weil. In 1993 the U.S. Public Health Service (USPHS) published a report on the safety and use of mercury amalgam fillings. The report didn’t find that they were safe, but it also didn’t find that they were unsafe, either.

The dentists that are putting in fillings are likely the most susceptible to repeated exposure to mercury vapor. Public sentiment and this risk have probably motivated a decline in the use of mercury amalgam fillings, which are being replaced by mercury-free resin.

To be safe, get your levels tested. Be especially careful if you’re pregnant or considering getting pregnant to avoid the fetus being exposed to high mercury levels. Reduce your intake of mercury by avoiding tuna, shark, swordfish, tilefish, and king mackerel.

If you have a mouth full of mercury amalgam fillings and it causes more anxiety than you can handle, go ahead and get them replaced. Or you can just wait until the fillings begin to break down and have them replaced with the newer mercury-free resin.