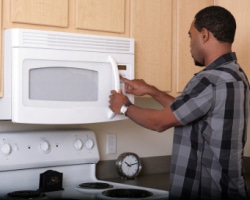 It can seem like such a simple thing: pop some left-overs in the microwave and dinner is ready. But heating and cooking food in a microwave oven is accomplished with the use of radio frequencies in the microwave range of the electromagnetic spectrum-and it does some not so good things to your food.

Here's how it works: A magneto spinning inside the oven creates small waves that carry powerful electrical energy. These small waves, known as "microwaves" are radio waves at a very high frequency, typically 2.45 Gigahertz (2.45 billion cycles per second). Radio waves in the microwave frequency range are absorbed by water, fats, and sugars in our foods. When the microwaves are absorbed, they are converted directly into heat.

In microwave cooking, the radio waves penetrate the food and excite water and fat molecules throughout the food, causing them to vibrate, which creates heat. A plate inside the microwave spins so the food is heated evenly. Heat is created evenly, in most cases, because the molecules are all being excited together by these powerful electrical waves.

What many of us don't realize is that much of the electromagnetic field (EMF) energy created by the microwave is not blocked completely by the oven's metal case. This dangerous energy escapes into our home environment and can, over time, affect the health of people who spend time in the vicintiy of the device while it is in operation. This powerful electromagnetic field can travel great distances and can be measured several meters from the oven itself, according to scientist, Dr. Neal Cherry. Cherry believes the safe level of exposure to microwave radiation is "Zero."

The case against using microwave ovens has considerable scientific backing. Since World War II, the Russians have experimented with microwave ovens, and according to U.S. researcher William Kopp, who gathered much of the results of Russian and German research, the following effects were observed:

As a result microwave ovens were banned in Russia in 1976; the ban was lifted in the mid-'80s, when Mikhail Gorbachev introduced Perestroika, a program of economic and political policy reform.

How to Avoid Microwave Oven Radiation