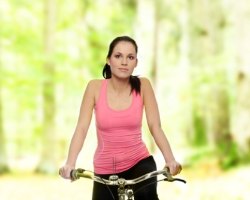 Growing up, running just came naturally to me. It was something I excelled in, and more importantly, something I loved. Running was the one constant thing in my life. My ‘me’ time, my stay-fit routine, my ‘clear my head’, my re-energizer and one of the things in life I knew I was good at and had the proof to show.

It wasn’t until I suffered a nasty snowboard fall that all of that changed. I suffered from a very large herniated disc that kept me unable to pick up my young kids or carry a bag of groceries, much less run. Without it, how would I function? What would fill the void? Along with the pain and inability to run, came a deep depression that unless you’ve lost something so close to you, is hard to comprehend.

After suffering two years with pain and depression, I successfully underwent two different back surgeries to make me whole again. During my road to recovery, I discovered my “can-do” attitude. Instead of focusing on what I couldn’t do, I redirected my focus to would I could do!

While leaving our local club I noticed a friend in the pool. Surprised to see her there, I had to ask what on earth she was doing swimming. That’s when she told me she had signed up for the Nautica Malibu Olympic distance triathlon (1.5K swim, 50K bike and 10K run) and encouraged me to join her. I knew the impact of running alone was not the best choice for someone who had suffered a spine injury and yet I didn’t know the first thing about swimming or biking. Immediately, I said yes!

It was not until age 36 I did two things I never thought I would do – swim in the ocean and “clip in” on a bike. The road was not easy. Learning something new, especially at a later stage of life, never is. My first time in the pool, I could barely make one lap without holding on to the edge and gasping for air. Eventually with the will not to give up, one lap became two, and two became three, until one day I found myself swimming successfully in the big blue ocean.

The swim became a wonderful sense of serenity to me while the bike became just the opposite; it became social hour (more like two or three). Now not only was I focusing on what I could do, and making changes in my body I had never seen before, it also allowed me to meet a new group of interesting athletes from all walks of life. What started as a terrible experience had somehow become one of the best summers I could remember since childhood.

Ever experienced a setback due to injury? Shoulder injury keeping you from playing tennis? Pick up jogging. Bad knees keeping you from jogging? Hit your local pool. Rather than focusing on what you can’t do, focus on what you can. I know trying something new can be terrifying but here are a few tips to get you going. First, set a specific goal. Make sure your goal is something realistic, yet challenging for your current level of fitness. You can always build on your goal as you achieve your original plan. (For example, running a 10K might turn into running a 10K in under 50 minutes next year.) Second, find a way to hold yourself accountable. Registering for local events is always a good way to keep you on track. Tell your friends and family about the goals you have set for yourself. They will help encourage you along the way, which will make you feel excited and enthusiastic about the journey ahead.

Next, find yourself a good training plan. Along with modern technology come a number of wonderful websites you can browse to find a training plan that fits your goals. Find a way to break your plan into steps, and reward yourself with each accomplishment. I must note, choose your rewards wisely. Extended time off and a tub of ice cream are not considered wise choices. Think… a new pair of running shorts or an updated playlist for your iPod. Finally, keep a log of your experience. Write down not only training information, but also keep notes on how you feel (physically and mentally) along the way.

When you’ve accomplished your goal you’ll have something to not only look back and be proud of, but also to build on for your next challenge. Hopefully, you too will be able to find the positive in what seems like a gloomy situation!