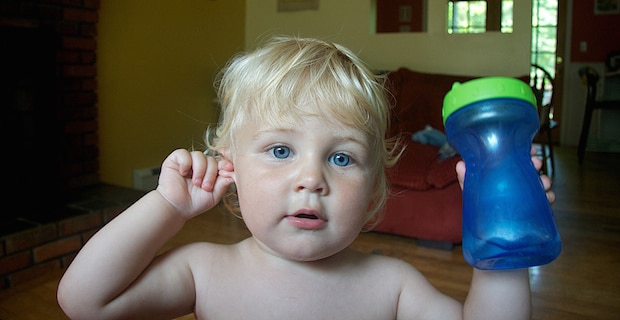 In a research paper published in the journal Environmental Health, scientists reveal a number of chemicals in plastic in name-brand baby bottles, sippy cups and food storage containers leach endocrine disrupting chemicals, reports Mother Jones. The products were labeled as being BPA-free.

BPA (bisphenol-A) has been banned or severely restricted in several countries including Canada, China and France because of its connection to negative health issues including developmental and fertility issues, liver problems, heart disease and behavioral problems in children. In the U.S., the FDA has prohibited BPA in certain children’s products including bottles and sippy cups. But as the research shows, health safety issues still exist in these plastic products.

Read more about BPA and migraines

“Between 2010 and 2013, scientists from CertiChem, a private lab in Austin, tested 50 reusable BPA-free plastic containers,” Mariah Blake writes in Mother Jones. “The researchers found that some products leached hormone-altering chemicals even before being exposed to conditions, such as heat from a dishwasher or microwave, that are known to unlock potentially toxic chemicals inside plastic.”

According to the researchers, more than three-quarters of the products tested released synthetic estrogens after being exposed to UVA rays and those used to sterilize baby bottles (UVC). Many products by popular brands including AVENT, Weil Baby, Evenflo, Born Free and CamelBak were promoted as being healthy alternatives to plastics containing BPA and phthalates, another hormone disrupting class of chemicals. Mother Jones reports that Born Free markets its baby products as the “natural choice for moms who want a safe, calm experience every time they feed their baby." Weil Baby claims that its bottles are made from "revolutionary new materials" that are "ultra-safe." But after UV exposure, CertiChem's study found that “both companies' products leached potent synthetic estrogens.” The researchers also noted that Tritan, a type of plastic product marketed as “estrogen-free” was found to be highly estrogenic in testing. Tritan was at the center of a $7 billion lawsuit between its manufacturer Eastman Chemical and CertiChem over false advertising. Blake notes that even Eastman’s research on Tritan-its own product-found it to be estrogenic.

What has scientists and advocacy groups most concerned about all of this is that previous research has indicated health risks are present even-and often more so-in low dose exposure to these chemicals in plastic. “In some cases, the effects appear to be handed down, meaning the chemical reprograms an individual's genes and causes disease in future generations,” writes Blake.