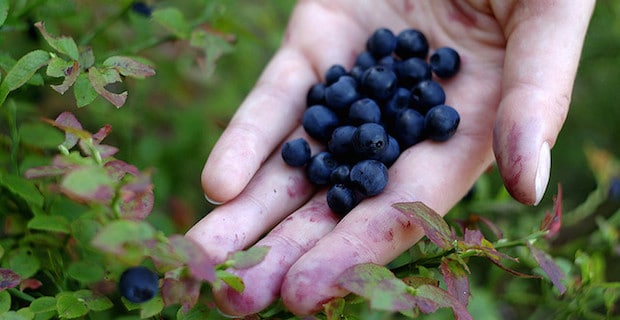 Wild plants and herbs have been used as natural medicine for thousands of years. Many wild plant species are edible or can be used medicinally, including various mushrooms, berries, and herbs; in fact, the majority of today’s anti-cancer medicines are of natural origin. Since many wild plants grow in remote regions, they are mostly free of chemical pesticides and fertilizers. The chaga mushroom, wild blueberries, and oil of oregano are wild plants that have been well-researched and proven to have powerful benefits to human health.

Approximately 150 species of medicinal mushrooms have been shown to inhibit the growth of various types of tumors, in particular, cancers of the stomach, esophagus, and lungs. Some experts insist that the Chaga mushroom, the woody fungus which grows on the stems of the black birch tree in Siberia, is the best cancer-fighting mushroom of all, in part because of its rich content of betulinic acid. Research shows that betulinic acid exerts a number of biological activities, in particular antitumor and immune-enhancing properties. Chaga’s other therapeutic properties include triterpenes, which can reduce cholesterol, improve digestion, cleanse the liver, and help combat respiratory problems, as well as germanium which helps to detoxify the blood, normalize blood pressure and prevent tumors. Chaga is most often consumed as a beverage.

Based on the ORAC test (Oxygen Radical Absorbance Capacity), wild blueberries have a higher cellular antioxidant activity than most other fruits, including pomegranates, strawberries, and cultivated blueberries. Because of their powerful antioxidant capacity, their health benefits include anti-aging, cardiovascular protection, and anti-cancer activities, inhibiting the initiation and promotion stages of cancer. The polyphenols in blueberries combat inflammation at the cellular level, and new research shows that blueberries may support cardiovascular health by reducing plasma cholesterol and LDL cholesterol levels as well as protecting the heart muscle from damage.

Oil of oregano has many medicinal properties, but first and foremost, it is a powerful antimicrobial agent. Studies have confirmed its ability to rapidly destroy all types of germs that cause infection – viruses, bacteria, fungi and parasites. Of the more than forty species of the oregano plant that grow around the world, only a few possess the powerful antimicrobial properties. The most researched species is Wild Mediterranean Oregano [try P-73, from Naturally Savvy's partner North American Herb & Spice], from which over 100 active compounds have been identified. Carvacrol and thymol are the primary compounds responsible for oregano's antimicrobial strength and effectiveness. Like other plant-derived phenols, they destroy pathogenic microorganisms by disintegrating their cell wall. With its many therapeutic uses, oregano oil can be used both internally and externally to treat colds, cough & flu, respiratory and sinus conditions, digestive problems such as diarrhea and parasites, and inflamed muscles and joints.

Read more about parasites and how to get rid of them

Before using wild plants to treat a serious medical condition, speak with a trained herbalist for proper instructions and to discuss any possible risks, side effects or contraindications.