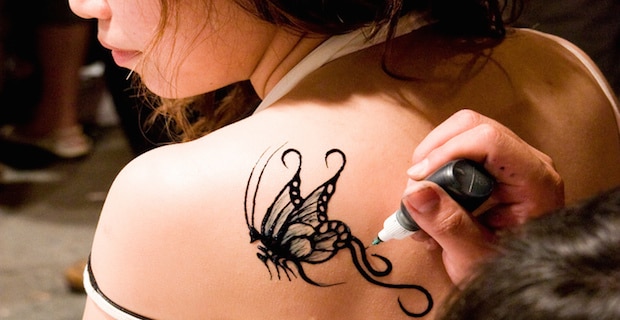 The arrival of warm and hot weather means people reveal more and more skin, and all that nakedness also means we see a lot more tattoos. At one time, it was common to see tattoos on sailors (my dad had one!), motorcycle riders, gangs, and other "bad boy" types. Now soccer moms, bank managers, healthcare professionals, and even kids are sporting the inked look.

What is a tattoo?

A tattoo is a series of puncture wounds that extend into the second layer of skin (dermis) and are filled with ink to create a design or word(s). Because the cells in the dermis are extremely stable, a tattoo is essentially permanent. (Sometimes tattoos can be removed successfully; more on that later.)

Tattoos have been around since ancient times, as archaeologists have discovered the body decorations on mummies. Various peoples around the world have and continue to get the skin designs for cultural, religious/spiritual, or social reasons.

Although tattoos used to be done manually by making a puncture with a needle and then injecting the ink into each site, most designs are now done using a handheld electric device. The machine consists of a sterilized needle at one end and several tubes containing ink. The tattoo artist uses a foot switch to power the device and inject the ink about 1 millimeter into the skin. It's critical to get the depth correct; not deep enough will result in a tattoo that looks ragged, while going too deep can be painful and cause bleeding.

Pain and bleeding are not the only risks you face if you decide to get a tattoo. Another is the risk of infection from nonsterile needles and/or a nonsterile salon environment. No one should get a tattoo unless the artist is a licensed practitioner who uses disposable needles, gloves, and masks and sterilizes all the equipment in an autoclave. Also check with your state or local health department for any possible complaints against the tattoo salon.

Make sure you are up to date on your tetanus and hepatitis immunizations before you make that tattoo appointment. If you have any type of bleeding or blood disorder, you should talk to your healthcare provider before getting a tattoo.

Even if the tattoo needles and the salon are spotless, there is also the risk of getting a bacterial infection from tattoo ink that is contaminated before it even reaches the salon. Research has shown that nontuberculous Mycobacteria, such as M. chelonae, has been found in tattoo inks and can cause various types of difficult-to-treat infections, vision problems, and lung disease. Signs of infection include tenderness and severe redness around the tattoo, changes in skin color adjacent to the tattoo, and pus.

Some people are allergic to the tattoo inks. In addition, if you have a skin condition such as eczema or psoriasis, you run the risk of experiencing a flare-up after getting a tattoo.

Read about skin care and health

Lastly, regard a tattoo as a permanent cosmetic procedure. Do you want Paul's name on your chest or a dragon on your arm for the rest of your life? Although laser treatments can be somewhat effective, there is no guarantee any tattoo can be removed completely or that there will not be some residual scar tissue. Other side effects can include infection and a good chance that the skin where the tattoo used to be changing color-either darker or lighter than the surrounding skin.

Success depends on factors such as the age of the tattoo, its size, the colors used, and the types of inks injected. Tattoo removal usually requires several visits (depending on the size and complexity of the tattoo) over a period of months and can be quite expensive.

So, should you get a tattoo? Weigh the risks, consider the long-term consequences, and talk to your healthcare provider. If the answer is still yes, then be sure you find a licensed professional who maintains a sterile salon and procedures. You also might want to think about getting a henna tattoo, which is not permanent. (That's another article!)