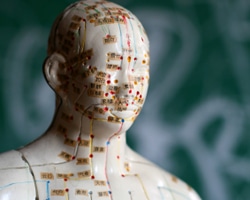 Traditional Chinese Medicine (TCM) was developed through studied observations of people and their symptoms, and of nature. In order to more easily describe patterns of balance and imbalance, five elements from nature were chosen: wood, fire, earth, metal, and water.

Each element produces another element. In earth you find metal; metal condenses water; water grows wood; wood creates fire; and fire burns down to earth. Picture this as a circular cycle. Within this cycle, each element is controlled by another element. Earth dams water; water puts out fire; fire melts metal; metal chops wood; and wood blocks earth like a tree fallen on a dirt path. Thus, it can be seen if there is an excess or a deficiency in the energy of one element, it will influence the other elements.

Unlike western medicine, TCM is not based on internal anatomy and physiology-it was developed prior to the dissection of cadavers. There are common terms between Western medicine and TCM, and although their meaning and functions may overlap, they are not the same. TCM has a completely different diagnostic system. For this reason, I will capitalize the first letter of the TCM "organs."

There are 12 main organs that are paired in TCM. They are: Spleen/Stomach, Lungs/Large Intestines, Heart/Small Intestines, Kidneys/Urinary Bladder, Liver/Gallbladder, and Pericardium/Triple Warmer (San Jiao). The last two are the most unusual organs for Western minds. The pericardium is an actual organ in the body; it is the membrane sac that surrounds and helps to protect the heart. In TCM, its function is similar, but includes more. The Triple Warmer is unique to TCM. It is an entirely intangible organ that covers the upper torso region (Lungs and Heart), middle torso (Stomach, Spleen, Liver, Gallbladder), and lower torso (Kidneys, Large Intestine, Small Intestine, Uterus, Urinary Bladder). It functions to connect the organs of the body as an avenue for Qi, and also helps control the passage of water. It is very complex because it is elusive and has been a subject of controversy for centuries.

Five of these organ pairs are designated to the five elements:

Other characteristics are also associated with each of these elements. For example, fire flames upwards (e.g. hypertension), water tends to go down (e.g. edema). In addition, each element is connected to a season, color, taste, tissue, emotion, climate, sense, sound, etc.

As you can see, everything is intricately interconnected. This helps in the TCM diagnosis and treatment because the root cause of the problem can be indicated by paying attention to the varying symptoms, and treatment can follow several paths to balance the body.

Note that when your TCM practitioner refers to an organ imbalance, it does not mean that physical organ is impaired. For example, a Kidney Qi deficiency does not mean there is anything necessarily wrong with your kidneys.

The five element system is complex. However, it is also a beautifully clear system that allows us to communicate more easily why the body becomes imbalanced, and to offer some simple solutions for treating illness and symptoms.

Annatto powder Collagen Family Planning Green what is rayon made of