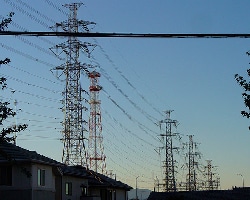 As we continue to surround ourselves with technology, more and more information is surfacing linking health problems and the electromagnetic fields produced by many of these modern conveniences.

It's difficult to have an intelligent conversation about electromagnetic fields (EMFs)-also called Electric and Magnetic Fields-without getting into a technical discussion, but a simplified understanding of the physics behind this ever-increasing environmental toxin can help you protect your family from these dangerous invisible waves.

EMFs are invisible lines of force that surround any electrical device. A "field" is the area in which charges interact with other charges-and with humans and animals. Electromagnetic fields consist of electric and magnetic components traveling together. These electrically charged waves travel at the speed of light and are characterized by both a frequency and a wavelength.

All "man-made" EMFs are measurable-the frequency is simply the number of oscillations in the wave per unit of time. They are measured in units of hertz; 1 Hz = 1 cycle per second. The wavelength is the distance traveled by the wave in one oscillation (or cycle).

If a current flowing through a conductor (wire) is made to oscillate at a very rapid rate, 3 KHz or greater, it is considered to be a radio frequency. At the speed of light, these waves radiate outward from the source in a pulsating pattern, much like the waves in the pond; this phenomenon is known as electromagnetic radiation.

Electric fields are measured in Volts per meter (V/M). They are always present on charged electrical wires and devices plugged into live outlets, and they are created by differences in voltage. The higher the voltage, the stronger the resultant field will be.

Dirty electricity has become a steadily growing problem in recent years due to our increased use of energy efficient CFL bulbs, dimmer switches, modern low-voltage lighting and electronic devices such as gaming systems and computers. All of these electrical devices contain power supplies that operate at a high frequency. They essentially "chop-up" our conventional AC power, using it in short bursts as opposed to a smooth continuous flow of current. This constant stopping and starting of the electrical current causes a combination of what engineers call "electrical transients and harmonics." In layman's term's it's referred to as "electrical feedback" or "electrical noise." Dirty Electricity is measured in Graham-Stetzer units (GS) using a Microsurge meter.

Radio Frequency fields are measured in microwatts per square centimetre and can be measured using an RF meter.

Cell phones, cordless phones and wireless networks produce radio waves and operate in the millions to billions of hertz (megahertz and gigahertz, respectively). These waves are often referred to as microwaves because of their small wavelengths, and because they are radio waves, they can travel long distances. Humans have harnessed much of the radio spectrum for communication purposes such as Wi-Fi, cell phone, radio, satellite TV and radar.