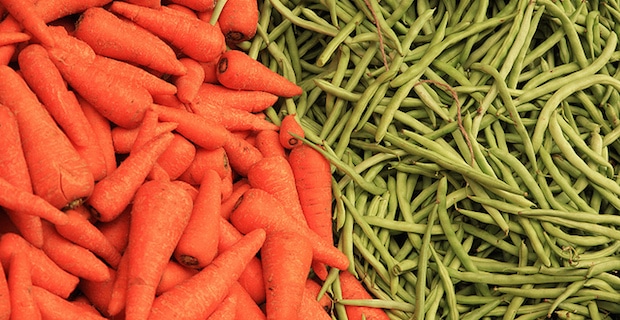 Research from the UK last year may make you think twice before ordering that burger. The comprehensive study, published in the journal American Journal of Clinical Nutrition found that vegetarians are one-third less likely to die from heart disease than meat eaters. That goes for fish eaters, too.

According to Reuters, it's not the first study to look at the heart health of vegetarians, but says University of Oxford's Francesca Crowe, who led the study, "we're able to be slightly more certain that it is something that's in the vegetarian diet that's causing vegetarians to have a lower risk of heart disease."

Crowe's team tracked close to 45,000 people in England and Scotland for more than a decade. Participants first reported on their diet and lifestyle habits in the 1990s. Approximately one-third of the study participants said they were vegetarian when they began the study. Over the course of the study, 1,066 subjects were hospitalized and 169 died as a result of complications from heart disease.

"If people want to reduce their risk of heart disease by changing their diet, one way of doing that is to follow a vegetarian diet," Crowe told Reuters Health.

With obesity rates at an all time high in the U.S., and diseases related to weight issues also on the rise, concerted efforts from the USDA, First Lady Michele Obama and countless chefs and health experts have been underway to bring healthier eating habits to American plates. Adopting a vegetarian diet has other health benefits beyond a reduced risk for heart disease. Vegetarians are more likely to be at an ideal, healthy body weight, have a reduced risk for certain types of cancer, and may live longer than meat eaters.

Read more about thriving during pregnancy on a vegetarian diet