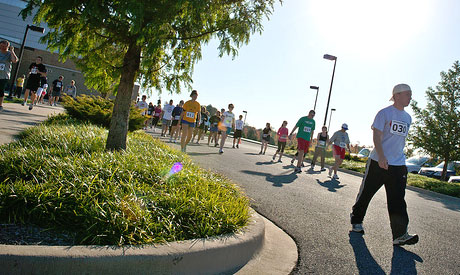 It always seems like there are a million reasons not to exercise, and a lot of us have no trouble coming up with them. Many of these excuses usually revolve around being too tired, or ultimately not having enough time for exercise. Depending on your goals, regular exercise doesn't need to be hours of your day, or even overly strenuous. The important thing is to simply begin to integrate activity into your daily life. Something as simple as walking has been proven to do wonders for your cardiovascular health.

A study reported by ScienceDaily has indicated that walking briskly can lower your risk of high blood pressure, high cholesterol and diabetes just as much as running can. The study, which was conducted over a six year period, found that the same energy used for mild intensity walking versus vigorous exercise while running resulted in similar reductions in the risk of developing high cholesterol, diabetes, and possibly heart disease.

The study's scientist and lead author Paul T. Williams stated in regards to the study, "Walking and running provide an ideal test of the health benefits of moderate-intensity walking and vigorous-intensity running because they involve the same muscle groups and the same activities performed at different intensities." Unlike previous studies where walking or running was measured by time, it was measured by distance. Williams added, "The more the runners ran and the walkers walked, the better off they were in health benefits. If the amount of energy expended was the same between the two groups, then the health benefits were comparable."

Participants in the study were 18 to 80 years old and clustered in their 40s and 50s. Men encompassed about 51 percent of the runners and 21 percent of the walkers. Williams added, "Walking may be a more sustainable activity for some people when compared to running, however, those who choose running end up exercising twice as much as those that choose walking. This is probably because they can do twice as much in an hour."

This new research means walking makes it easier than ever to get a workout in and boost your cardiovascular health. Williams concluded by saying, "People are always looking for an excuse not to exercise, but now they have a straightforward choice to run or to walk and invest in their future health."