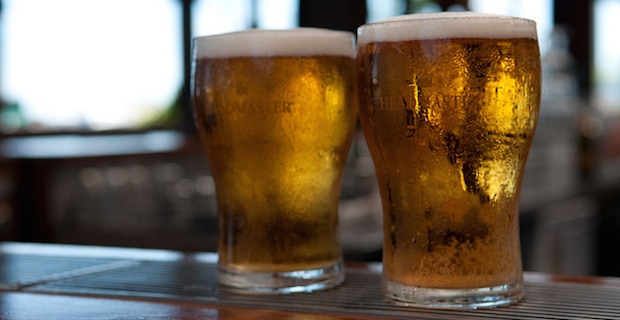 Cases, six-packs, or pints of beer are usually associated with the unwinding of a long day or week, or as celebratory drinks typically handed out at parties or barbecues. While unfortunately a lot of these beers, when consumed in excess, are high-calorie and low-health, there are some health benefits that can be reaped (when taken in moderation, of course). That's right. Beer may actually be good for you.

Here are four reasons to feel good about grabbing a pint:

1. Beer can be rich in antioxidants

Dark beers can be great sources of antioxidants, and a pint of Guinness is an example.

Read more about the health benefits of red wine

2. Beer can boost your vitamin levels

A study at the TNO Nutrition and Food Research Institute and published in The Lancet found that “beer-drinking participants had 30 percent higher levels of vitamin B6 levels in their blood than their non-drinking counterparts, and twice as much as wine drinkers,” reports Yahoo Health.

3. Beer can lower your blood pressure

4. Beer can be a source of fiber

Because it’s made primarily from barley, beer can be a good source of dietary fiber. EatRight.org reports that a “12 ounce bottle of lager sports 0.75 grams of fiber while the same amount of dark beer boasts 1.3 grams.”

Like anything else, it’s important to remember the rules of moderation. Just because something can provide a few health benefits to the old ticker doesn’t mean we should be out there indulging a little too heavily. It just means we can forgive ourselves once in a while for enjoying a pint.