Hiding in everything from diet sodas to gum to even infant formulas, artificial sweeteners have become commonplace in pre-packaged foods. They rose to popularity in the late '70s for helping people reduce their risk of Type 2 diabetes, heart disease and stroke due to increased sugar intake. And when the rumor quickly spread that artificial sweeteners may even help you shed some pounds, major food manufacturers started swapping out conventional sugar for the artificial variety to provide consumers with what they thought to be the “slimmer” choice.

But a newer article reveals that the opposite may be true. Yes, artificial sweeteners may be responsible for adding those unwanted extra pounds to your midsection.

An article published in Trends in Endocrinology and Metabolism, cites research papers to suggest that artificial sweeteners interfere with learned relationships in the brain’s pleasure center and hormones that regulate appetite, which may drive you to consume more sugar as a means of satisfaction. Other evidence showed that artificial sweeteners messed with the body’s ability to regulate calories based on eating something sweet. But, weight gain wasn’t the only conflicting finding to arise from the study-artificial sweeteners may actually increase your risk of obesity, Type 2 diabetes and cardiovascular disease, as well.

Saccharin is 300 times sweeter than table sugar, but is often mixed with other artificial sweeteners due to its metallic aftertaste. For nearly 20 years, saccharin was suspected to be a human carcinogen by the U.S. National Toxicology Program, until it was de-listed in 2000 due to insufficient evidence. The warning label was subsequently removed and suddenly it was fine for consumption, though health advocates still question its safety.

Sucralose is a zero-calorie artificial sweetener that is 600 times sweeter than table sugar. Though it is deemed safe by the FDA, a number of reports claim that its composition makes it nearly impossible for our bodies to metabolize normally. Reported side effects include: skin rashes, agitation, dizziness, numbness, diarrhea, swelling, muscle and stomach pain, headaches, intestinal cramping, and bladder issues.

Avoid: Splenda products and look for “sucralose” on the label.

While early studies showed a link between consumption of acesulfame potassium and cancer in laboratory animals, more scientific study on the artificial sweetener is needed. Concerns have been attributed to contamination of methylene chloride, a known human carcinogen.

Avoid: Products such as Sunett, Sweet One, and Sweet 'n Safe, and look for “acesulfame potassium,” “acesulfame-k” or “ACE” on the label. 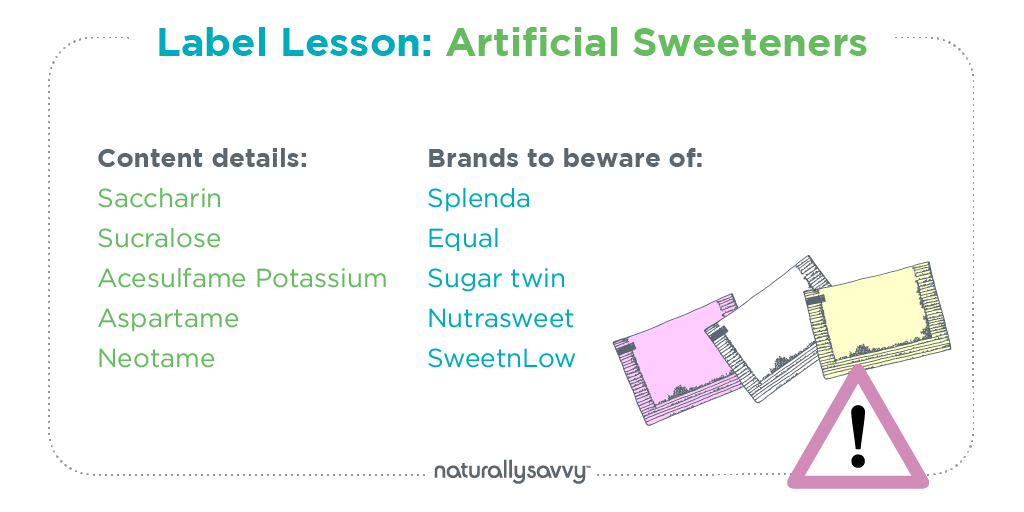 The uncelebrated sweetener in diet sodas, Equal and NutraSweet, aspartame is one of the most controversial ingredients in pre-packaged foods. Out of all of the complaints that come into the FDA each year, aspartame accounts for roughly 75% of them. There are 92 reported side effects, including: birth defects, diabetes, arthritis, severe PMS, migraines, Alzheimer’s disease, aggression, severe depression, and suicidal tendencies. Need I say more?

Avoid: Artificial sweetener products such as NutraSweet, Equal, Sugar Twin, Spoonful and Equal-Measure, and look for “aspartame” on the label.

The newest artificial sweetener on the block, neotame was originally introduced by corporate behemeth, Monsanto, before it sold NutraSweet. It’s chemically similar to aspartame, and like aspartame, it metabolizes into formaldehyde when consumed. But there is one big difference: neotame contains 3-dimethylbutyl, which sits on the Environmental Protection Agency’s (EPA) list of the most hazardous chemicals.

Avoid: Artificial sweetener products such as NutraSweet and Sweetos, and look for “neotame” or “neohexyl-aspartame” on the label.