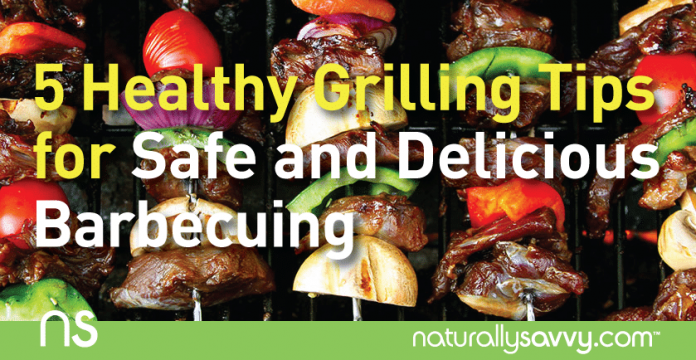 Summer is almost here, and that means that it’s time to fire up the barbecue, but before you go grilling up dinner every night, not all grilling methods are created equal when it comes to putting a healthy meal on the table, and we’re not talking about the foods you choose to cook.

What type of grill you use, how you prepare your food, and how long you cook it for are just a few factors that can affect the healthiness of your next meal off the grill. Follow these five tips for healthy grilling this season.

There is much debate over whether cooking with a gas grill or a charcoal grill tastes better with many people claiming that you just can’t get the smoky flavor of good barbecue on a gas grill. But one thing is for sure, and that’s that gas grilling is much more eco-friendly. According to Earth 911, charcoal grills emit three times the amount of carbon emissions as gas grills which is neither good for the planet or your health.

2. Don’t Eat Charred Bits of Food According to the National Cancer Institute, when you cook foods-particularly muscle meat-at high heat such as you would on a grill, heterocyclic amines (HCAs) and polycyclic aromatic hydrocarbons (PAHs), which have been proven to cause cancer in animals form, are released. The char on grilled foods is what houses the highest content of these dangerous chemicals. Fatty foods tend to char more so cook leaner cuts of meat on the grill to avoid charring.

3. Clean the Grill Before Each Use

Those HCAs and PAHs don’t all make it to your plate. They linger with the bits of food that stick to the grates of the grill so to reduce your exposure to these chemicals and for a truly healthy grilling experience be certain to thoroughly clean your grill before each use.

4. Marinate Everything Before Cooking

Cooking Light cites a Kansas State University study in which researchers found that marinating foods in antioxidant-rich marinades before they go on the grill drastically reduces the levels of HCAs found in those foods after they are cooked. The commercially made marinades that contained rosemary and thyme produced the greatest reduction of HCAs with an 87-percent reduction in the chemicals. That happened to be the same content of those ingredients in the marinade.

5. Cut Food into Smaller Pieces to Reduce Cooking Time The National Cancer Institute notes that the amount of HCAs and PAHs found in grilled meats directly correlated with the amount of time the foods spent in the high heat. While cooking foods to rarer conditions or pre-cooking them before putting them on the grill are two options for reducing cooking time on the grill, cutting the foods into smaller pieces or cooking them kabob style will allow them to cook through more quickly while still achieving the flavor and doneness that are what make you want get the barbecue going in the first place.

[Editor's Note: If you want to eliminate unhealthy ingredients from your diet for good, click here to sign up for a Naturally Savvy Get Healthy Challenge.]