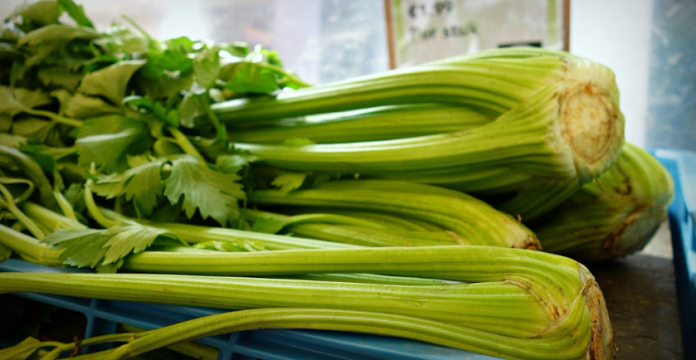 When I was a kid, it seemed like my mother added celery to everything: potato salad, egg salad, stew, soup, and casseroles. Celery stuffed with cream cheese appeared on every vegetable tray, and sticks cozied next to carrots for snacks. This crunchy green vegetable is often overlooked or thought of as just "diet food."

Yet celery (which belongs to the Apiaceae family, as does its cousin, celery root) is much more than a diet food or the crunch in a salad. The stalks have medicinal value as well as culinary and nutritional ones, and it's about time we talk about why more celery should be on the menu.

Celery is super low in calories, has 0 grams of fat, and is composed primarily of water. So where's the nutritional value? Glad you asked! Celery provides substantial amounts of vitamins K and A, fiber, folate, potassium, and calcium. Free-radical antioxidants abound-dihydrostilbenoids, lavones, flavonols, furanocoumarins, phenolic acids, and phytosterols.

Celery has a long history of medicinal use among folk medicine followers as a detoxifying vegetable that can prevent illness. Celery seeds were valued for their ability to relieve pain. Today, celery and celery seed have claimed a number of health benefits that are still being studied. For example:

• Lowers blood pressure. Animal research has indicated that celery seed extracts can lower blood pressure in hypertensive rats. Celery may provide this benefit by relaxing smooth muscle and enhancing the flow of potassium and calcium into and out of cells. Scientific evidence that celery has the same impact in people is still pending.

• Helps fight cancer. Luteolin, a flavonoid found in celery, has been shown to have cancer preventing properties. In addition, celery contains polyacetylenes, which have cancer-fighting properties, especially when it comes to breast, blood (leukemia), and intestinal cancer. In a Danish study, the authors noted that polyacetylenes have been associated with antitumor activity.

• Celery is a great source of fiber, which facilitates digestion, as well as water and electrolytes, which can help prevent dehydration and reduce bloating.

• Lowers inflammation. The antioxidants and polysaccharides in celery have anti-inflammatory abilities, especially caffeic acid, ferulic acid, and flavaols like quercetin. Reducing inflammation is critical because it is a key factor in serious health issues, such as cardiovascular disease, arthritis, irritable bowel syndrome, kidney infections, cancer, and dementia.

• Helps prevent ulcers. Another unique feature of celery is the presence of a special ethanol extract that protects the digestive tract lining from ulcer formation. In fact, one study found that a compound in celery seeds was effective against Helicobacter pylori, bacteria associated with ulcers. Scientists have also noted that the tannins, volatile oils, alkaloids and flavonoids in celery control gastric acid in the stomach as well as enhance the protective mucus lining.

• Fights infections. Eating celery helps lower the level of uric acid and stimulates the production of urine (thus acting as a diuretic), which can be helpful in fighting urinary tract infections.

Always buy organic celery if it is available, because this vegetable is among one of the most heavily treated crops. In fact, it is a regular member of the Environmental Working Group's Dirty Dozen list.

Choose celery that has firm stalks and brightly colored leaves (if they are still attached). Never wash celery until you are ready to use it. Store the vegetable wrapped in a light towel or paper towel in the refrigerator. It should keep for about 5 to 7 days, after which its nutritional value begins to fade. When ready to use celery, discard the base and rinse the stalks and leaves well to eliminate dirt and pesticide residue. The leaves are nutritious too, so don't throw them away!

Raw celery delivers the most nutritional and crunch value, but if you want to cook it, steaming it for a few minutes until slightly tender will not eliminate too much of its antioxidant power; just 1 to 17 percent disappears compared with 38 to 41 percent if you boil or blanch the vegetable, according to researchers.

Although many people ignore celery leaves, they are also edible and can be enjoyed in a variety of ways. For example, you can add them to stir-fries, smoothies, and soups-I've been known to toss them into salads as well.

Here are two celery recipes to get you started:

1 cup button mushrooms, cut in half

Heat the oils and chili pepper over high heat in a frying pan for 90 seconds until the seeds sizzle. Add the celery and stir-fry for 3 minutes, then add the mushrooms and soy sauce and stir-fry for 60 seconds more. Serve over rice, couscous, or other cooked grains or as a side dish.

Cut celery into 1-inch slices on the diagonal. Heat oil in a large skillet over medium heat. Add celery, onion, and seasonings and cook until tender. Add broth, reduce heat to low, cover and simmer for 5 minutes. Uncover and cook for 5 minutes longer, allowing the broth to reduce. Taste for seasoning and serve immediately.