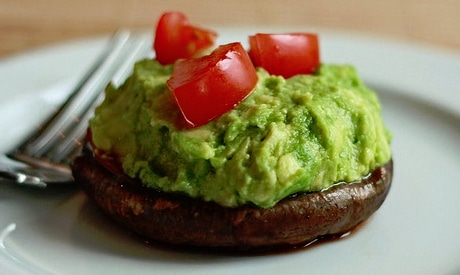 As a vegetarian and then a vegan for more than four decades, I have enjoyed Portobello mushrooms in a variety of ways, but the best is probably lightly seared and seasoned with fresh oregano, black pepper, and cilantro. Little did I realize until now that those thick (dare I say meaty?) mushrooms are really button or crimini mushrooms (Agaricus bisporus) that have been allowed to grow to maturity!

Thus the small white or brownish button mushrooms you see in stores represent certain strains that can be harvested during an early stage of the growth cycle. Although I like these fungi as well, the bold maturity of a Portobello is, in my opinion, far better.

Besides tasting absolutely wonderful, what are some other reasons to love Portobello mushrooms? Let me give you six.

1. They're super low in calories.

A 100-gram serving of Portobello mushroom contains only 30 calories, but it goes a long way toward filling you up. You can eat 3 portobellos for less than 100 calories! Put your portobellos on a bed of kaniwa, brown rice, or quinoa and toss on some grilled herbed tomatoes, and you have a meal that’s satisfying and low in calories.

2. They make a great meat substitute.

Each 100-gram serving of Portobello mushroom provides slightly more than 3 grams of protein, no cholesterol, and only 0.5 grams of fat. Portobello makes a wonderful meat substitute grilled or in a sandwich. Adding Portobello to another protein source such as tofu, quinoa, meat, or fish enhances your total protein intake without adding many calories or fat.

3. They're a great source of important nutrients.

If you want to follow a low-salt diet, Portobello mushrooms definitely should be on your menu. There is no need to add salt, either, as these mushrooms absorb flavors well, so do a quick stir-fry with fresh herbs and garlic for a real tasty treat.

5. They're a source of ergothioneine.

This mushroom contains high concentrations of a potent anti-inflammatory and antioxidant called ergothioneine. Tip: this micronutrient is released from mushroom cells when the fungus is cooked. (By the way, portobello mushrooms also contain minute amounts of agaritine, which can be carcinogenic when consumed at extremely high doses. Cooking, however, eliminates this substance.)

6. They can fight cancer.

Some of the cancer-fighting compounds found in portobello mushrooms include beta-glucans, grifolin, lentinan, and lectins. However, thus far, the research has been done in test tubes and with animals. Even so, the results have been promising. A recent study from Brazil, for example, found the beta-glucans in Agaricus bisporus to be effective against liver cancer cells. Another study, conducted at Arizona State University, reported that portobello mushrooms and the more immature button mushrooms may be protective against breast cancer.

Make a point of including Portobello mushrooms on your shopping list as much as possible. When you do, add a few other ingredients to make this easy to prepare recipe.

Destem the mushrooms, chop, and put aside. Place ¼ cup of broth in a large skillet and cook the onion, garlic, and red pepper over high heat for 2 minute. Pour in 1 cup broth and add seasonings, vinegar, mushroom caps, and stems and cook for 5 minutes, covered. Turn the caps over and cook for an additional 4-5 minutes. Add the remaining ¼ cup of broth to prevent sticking and to serve over the caps with the veggies.