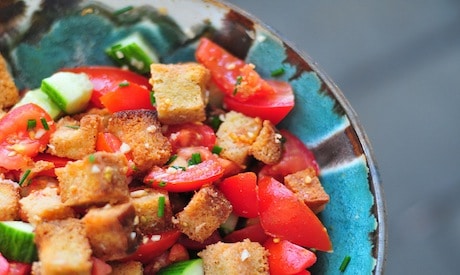 The yellow school buses may be back in action, but in many parts of the country it is still steaming hot. With that in mind, and with the bustle of back-to-school business leaving less leisure for playing in the kitchen, it’s actually a great time to make some dishes that don’t require heat. These seven late summer recipes don't need the stove to satisfy.

Yes we still have tomatoes, lots and lots of them, so make gazpacho. Try this recipe for Great Gazpacho, it calls for canned tomatoes but you can try swapping fresh ones instead. If you are having a kitchen crisis, look no further than this Emergency Gazpacho, which can be whipped up in 10 minutes. And if you have a lot of beautiful end-of-summer vegetables looking at you beseechingly, give them a fancy farewell in this truly summer recipe for Wolfgang Puck’s No Cook Gazpacho .

This is what would happen if your basic Chinese sesame noodles hooked up with cole slaw. Simply take your favorite recipes for sesame noodles, and use shredded cabbage in place of the noodles. You get all the savory deliciousness of the sauce, with all of the beneficial nutrients of the cabbage … and you don’t have to cook a thing.

This little wonder is much like the Sesame Noodle Cole Slaw above, but it has a secret ingredient that adds a whole new dimension. Find the sneaky trick here: Betty’s Fumi Salad.

Turn a sandwich into a salad, specifically, turn a beautiful summer tomato sandwich into a salad by making panzanella, the Tuscan bread and tomato salad that is magically better than its parts. (See picture above.) For the simplest mix, toss cubes of day-old bread with olive oil and some garlic, salt, torn basil and a bunch of chopped tomatoes – and let sit just long enough for the flavors to permeate and the bread to soften while still retaining some body. After that, anything can happen; think onions, bell peppers, cucumbers, olives, cheese, capers, vinegar are so on.

Avocado soup is like a ridiculously delicious savory smoothie, and it’s certainly satisfying enough to serve for lunch or a light dinner. It requires nothing more than ripe avocados, yogurt, and vegetable stock puréed in the blender until a think and creamy texture is arrived at. You can also add in cilantro, jalapeno, and lime; can be served with tortillas, chips or bread.

When you think of pie you may think of rolling out pie dough and hot ovens and all sorts of potentially labor-intensive scenarios, but think again. This raw Banana Pie requires little more than whirring things in the food processor and putting them all together.

Again, another raw dessert recipe, this time in the form of a Raw Strawberry Coconut Dream Cheesecake; it will leave your kitchen cool and your heart warm.