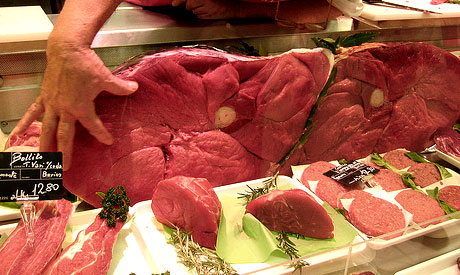 NPR’s On Point with Tom Ashbrook led an hour long discussion on the dangers of antibiotics in our livestock, further encouraging consumers to take a stand for the sake of public health. The panel included Congresswoman Louise Slaughter (D- NY), Mike Apley, veterinarian and researcher at Kansas State University, Lance Price, professor of environmental and occupational health at George Washington University, and Stephen McDonnell, founder and CEO of Applegate, a producer of organic and natural meats. The discussion left many a meat eater contemplating veganism or at least permanently making the switch to organic meat.

Rep. Slaughter, who has long advocated against the overuse of antibiotics in animals, spoke of their grossly unmonitored sub-therapeutic applications. Speci?cally, the practice of adding low doses of antibiotics to livestock feed to produce a fatter animal and to fend off illnesses before they happen.

“It’s the equivalent of putting antibiotics on your child’s cereal,” said Rep. Slaughter, referring to the 30 million pounds of antibiotics used on livestock each year, 80 percent of all U.S. anitbiotic inventory. Read more about GMOs in your breakfast cereal

Rep. Slaughter spoke of the “unspeakable and awful conditions” that animals are brought up in, leaving them constantly sick while an industry pro?ts off of the fatter animals that antibiotics produce. According to Rep. Slaughter, it’s a reality that we can no longer ignore, considering that 18,000 people die of antibiotic resistant superbugs every year, more than are currently dying of AIDS.

“What’s the other option, just go ahead and let antibiotics be unusable?” said Rep. Slaughter. “We could reach a point when strep throat becomes a fatal disease.”

Dr. Apley countered stating that the sub-therapeutic use of antibiotics would be phased out anyway as a result of FDA’s Guidance 209, which states that producers should voluntarily stop using antibiotics for growth promotion. He hinted that the issue was being overblown and that the industry was aware of the problem and was dealing with it on its own.

“It’s hard to be in this conversation sometimes and trying to set facts and ?gures straight without seeming like you’re trying to deny,” he said, stating that only 30 percent of antibiotics are actually used for growth promotion in livestock. Read more about the effectiveness of antibiotics

Professor Price, a microbiologist who has been studying the issue for years, contended that it’s the meat industry’s responsibility to be forthright about the antibiotics currently used and for what reasons. Transparency is what’s lacking in dealing with this increasingly dangerous public health issue. “We want data, we want clear data–what antibiotics are being used? In what species? For what purposes? For what duration?” he said.

Organic meat producer Stephen McDonnell stated that the industry as a whole needs to be restructured to produce healthier animals without the use of antibiotics by improving the animal’s living conditions. “I’ve been in this business for 26 years and 1 percent of our animals get sick,” he said.

The discussion brought immediacy to an issue that the FDA has been slow to act on, but the evidence is clear: The overuse of antibiotics in livestock is an increasingly deadly public health issue and without urgent attention it could render antibiotics in their present state ineffective.

Listen to the show here.