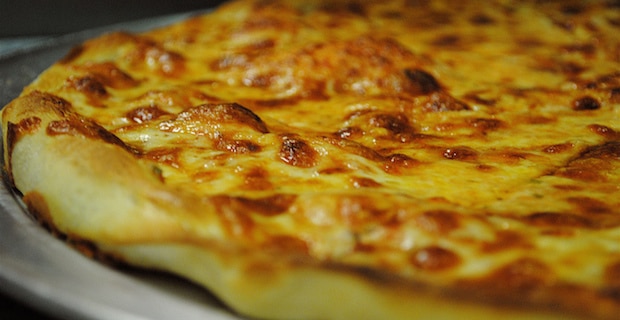 Food addiction is a very serious condition compounding our nation's obesity epidemic and related health issues like hypertension, heart disease, and diabetes. And it seems that even when we know which foods we should be avoiding, we find ourselves incapable of mustering the willpower to resist them. One such culprit: cheese.

As a vegan, I've heard it probably more than any other excuse: "I would go vegan, except I could never give up cheese!" That excuse always struck me as kind of funny as I never really had much of a taste for cheese-or any dairy products for that matter. It was one of the easiest foods to give up. The texture of most cheese always bothered me; or it was the smell, or the way it seemed to linger on my tongue long after I'd swallowed it down.

Read more about vegan alternatives to cheese and other dairy products

Meat makes sense. Hunt it down and eat what you can. Eggs, too. Those hens are going to lay them no matter what, right? But lapping up the milk meant for the baby of another mammal always put dairy at the top of my probably-not-meant-for-human-consumption list. And it seems there may be something more to it, according to Michael Greger, M.D.

Greger suggests that proteins present in cow's milk are designed to bond the baby with its mother – mainly to prevent the calves from wandering off and forgetting where their food is. When the proteins break down, they form into peptides that have an opiate-as in addictive-effect on the baby cow. They're essentially a form of morphine. It's what Dr. Neal Barnard of the Physician's Committee for Responsible Medicine calls "dairy crack," and for good reason.

When humans consume cow's milk, these opioid compounds (called casomorphins) are released into our bloodstream, triggering some of the same effects as if we'd taken an opiate. These proteins are even more concentrated and condensed, though, in the form of casein-the protein most commonly found in cheese.

Greger also references a study that shows a distinct connection between cow's milk and infant apnea, which demonstrates an increased risk of serious breathing problems for infants that consumed dairy and have high levels of casomorphins in their bloodstream. The condition can be fatal. And the research also connected the casomorphin-induced issues with an increased risk of certain cases of autism.

There are no studies on whether or not the growth hormones and antibiotics routinely fed to conventionally-raised dairy cows impact the production or potency of casomorphins. Nor has there been any research on the effects of genetically modified grains (commonly fed to dairy cows) or the pesticides most grains are treated with on the proteins.

But what we do know is that people who try "giving up" dairy – particularly cheese – have inherently challenging times doing so. And this isn't just for individuals adopting a vegan diet; as one of the most calorically dense foods, loaded with saturated fat and cholesterol, avoiding or reducing cheese consumption is often recommended for losing weight or treating a diet-related illness.

Looking to break your cheese habit? Fortunately nowadays there are a number of cheesy-tasting alternatives you can give a try. Like any addiction, time is on your side. The longer you stay away, the easier it gets. Keeping yourself distracted during those first few cheddar-less days can help a lot. Over time, your taste buds will change and as you begin to feel better without the dairy, you'll be more prone to stay the course.