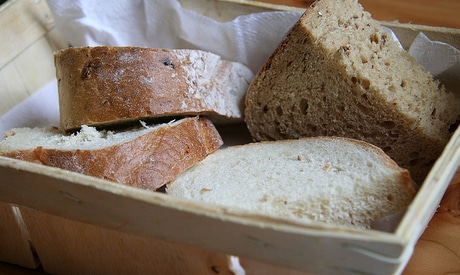 You have probably noticed the increasing prevalence of “gluten-free” and “wheat-free” foods in recent years. With a vast variety of grains and grain products to choose from, it is a shame that gluten-related health issues are on the rise.

Gluten is part of the tough, elastic protein found in wheat, rye, barley, oats, and many other grains. It binds the dough in baking and prevents crumbling. Gluten is formed when the proteins, glutenin and gliadin, present in flour, combine with water. In baking, the gluten in dough is stretched by the carbon dioxide produced by the action of yeast or baking powder, giving the dough a spongy and elastic texture.

Gluten can be found in breads, cakes, pastries, cookies, biscuits, crackers, battered foods, cereals, snack foods, pastas, and pizza. Because gluten is also used as a thickener and filler, it is found in soups, gravies, sauces, processed meats, pickles, sweets, instant pudding, and even in chocolate!Read more about gluten-free options

Repeated exposure to gluten can damage the villi (the absorptive surface) of the small intestine resulting in poor nutrient absorption. It is estimated that 12% of the population is affected by gluten sensitivity. Unfortunately, gluten sensitivity is often asymptomatic, or manifests in such a way that makes tracing symptoms back to gluten difficult. Gluten sensitivity is characterized by antigliadin antibodies. These antibodies indicate that the intestinal wall has been damaged and is permitting leakage of undigested food proteins into the bloodstream. The immune system produced antibodies to attack these foreign proteins as if they were invading microbes. This experience is called leaky gut syndrome, which marks the cause or underlying factor of most autoimmune diseases including lupus, rheumatoid arthritis, and asthma. Sadly, gluten sensitivity and leaky gut syndrome remain poorly recognized; in fact, many physicians and health practitioners often suggest that patients ignore symptoms altogether.

The hallmark symptom of gluten intolerance is bloating after eating a starch or grain. For many of us, starch is a regular part of the day, beginning with toast or cereal for breakfast. If you notice that your belly is flat upon awakening but becomes bloated immediately after eating a starchy food, suspect gluten. An indicator of more advanced gluten intolerance is a developing sensitivity to everyday chemicals such as perfumes and paint fumes.

A strict gluten-free diet has proven helpful to patients who are fortunate enough to recognize the symptoms. If you suspect gluten sensitivity, avoid foods made from or containing these ingredients for a minimum of 6-12 weeks to repair the lining of the small intestine. Read labels carefully. Some of these ingredients will be found where you least expect them.Read more about where gluten may be hiding in your diet

For more information about gluten and celiac disease, consult a practitioner who understands gluten sensitivity and its connection with autoimmunity, and check out www.celiac.com. For information about testing for Celiac Disease, www.glutenfreedom.net