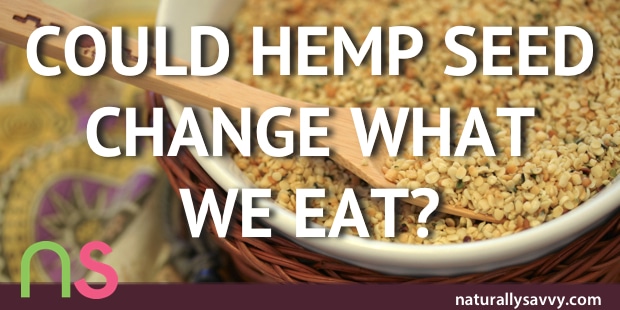 Hemp seeds want to be the new chia seeds. Considering the current hemp seed market is about one-sixth that of chia seed, they have a way to go. But some people would like to launch hemp seeds and hemp seed oil beyond chia and other seeds on the market. Hemp seeds could change what we eat, but first it seems there are some hurdles to overcome.

Perhaps the most tiresome myth is that hemp seed can get you high. Yes, it is true that hemp is a close relative of the marijuana plant, which has been bred to contain high levels of the psychoactive substance THC (tetrahydrocannabinol). In fact, hemp and marijuana share the same genus and species (Cannabis sativa), but they come from different cultivars.

A cultivar is “a race or variety of a plant that has been created or selected intentionally and maintained through cultivation.” The three primary cultivar groups of cannabis being cultivated are (1) those cultivated mainly for their fiber; (2) those grown for seed which can be used as such or pressed to get hemp seed oil; and (3) those grown for medicinal or recreational purposes. Marijuana is in this latter group and is cultivated for high levels of THC.

For the record, technically hemp seeds do contain a minuscule amount of THC. Most of the THC is present in the hulls, which are removed during processing. In addition, hemp seeds are cleaned and processed using methods that reduce levels of THC to less than one part per million.

If you tried to get high off of the other two cultivars, however, you would be wasting your time–and some darn beneficial hemp seed to boot, especially when it comes to nutrition. That’s because hemp seeds are a nutritional delight. Three tablespoons (30 grams) of shelled hemp seeds provide:

These nutritional tidbits alone make hemp seeds a great choice when it comes to snacks or adding them to foods to improve their health value. One person who is a firm believer in the health benefits of hemp seed is Richard Rose, a self-proclaimed “most successful and imitated Hempster since 1994.” Rose founded the Medicinal Hemp Association, is on the board of the American Hemp Association, and has produced “more original educational materials on the subject than any other organization.”

When I spoke with Rose recently, he explained that “There’s not a food company in America that can’t make their current line taste better or be higher in nutrition with shelled hemp seed or hemp seed oil. The hemp food industry has suffered from a lack of innovation and progress the last 15 years, but that is about to change.”

A Few Words About Cannabinoids

Part of that change has something to do with something called cannabinoids. Hemp seeds and hemp seed oil (Note: it’s often incorrectly called hemp oil) contain a cannabinoid called cannabidiol (CBD). Cannabinoids are various chemical compounds present in the cannabis plant. These compounds act on the receptors on cells that suppress the release of certain neurotransmitters in the brain. Research has shown that cannabinoids work together to provide health benefits, and the vast majority of them do not have psychoactive abilities.

Rose explained that CBD is the dominant cannabinoid in hemp and the second most in marijuana. The critical thing to remember about CBD is that it is NOT psychoactive, illegal, or addictive. In fact, CBD has important medicinal properties. Many of the health benefits associated with cannabis are because of CBD.

That fact could hopefully result in hemp seeds and hemp seed oil being incorporated into more and more foods that are on the market and reach the status of functional foods: “modified food that claims to improve health or well-being by providing benefit beyond that of the traditional nutrients it contains."

Currently, hemp seed and hemp seed oil do contain some CBD, which means hemp seed products on the market do as well. However, Rose sees the day when additional CBD and other cannabinoids “will be incorporated into foods and supplements.” In the future, “Every food company will eventually have line extensions or entire-line supplementation with CBD.”

Yet another interesting fact about hemp seed is that there is an ongoing struggle in America to legalize the growing of hemp! This may seem strange in a country where most of the states have already made medical marijuana legal and a few have even granted recreational status to the psychoactive drug.

For now, hemp can be legally grown in only 13 US states, and in 2015 only eight of those states will be growing it at all, according to Rose. He explained that “For a few years, the seed grown will be needed for planting, but after that technical seed will be freed up for food and oil.”

Currently, the United States imports about $50 million in primary hemp products from Canada, the vast majority of which was shelled hemp seed, hemp seed protein, and hemp seed oil. Rose is working behind the scenes not only to promote hemp seed foods but also with the CBD industry, which, he noted, is freely sharing its intellectual property for the advancement of innovative hemp seed foods and supplements. Someday soon, hemp seed could change what we eat and why we eat it.

Editors note: If you're looking for delicious breakfast ideas containing hemp seeds, Nature's Path has a nice variety of products to choose from.

Pumpkins: Trick or Treat? 7 Surprising Things You Didn't Know About Pumpkins But Should

Digestion and Detox: How to Do Them Right