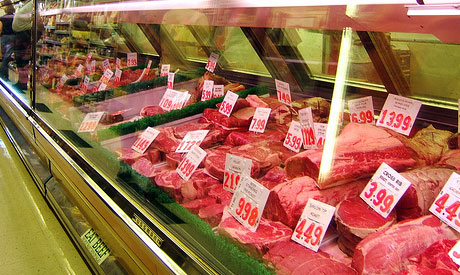 The Environmental Working Group's recent report Superbugs Invade American Super Markets seems to have provoked a harsh rebuttal from the FDA. The agency found fault in the report saying, "the EWG report oversimpli?es the NARMS data and provides misleading conclusions. We do not believe that EWG fully considered important factors that put these results in context."

The FDA is referring to the National Antimicrobial Resistance Monitoring System (NARMS). In their response, the FDA cautions consumers that certain aspects of the report are alarmist. For example, stating that some bacteria are naturally resistant to certain antibiotics, so their resistance isn't necessarily dangerous. Further, the FDA insists that NARMS shows ?rst-line treatments for salmonella, enterococcus, E. coli, and campylobacter are still effective and data is similar to prior years.

The FDA pushed back at EWG in a big way stating that the term "superbugs" was misused. According to the FDA, "Additionally, we believe that it is inaccurate and alarmist to de?ne bacteria resistant to one, or even a few, antimicrobials as "superbugs" if these same bacteria are still treatable by other commonly used antibiotics. This is especially misleading when speaking of bacteria that do not cause foodborne disease and have natural resistances, such as enterococcus."

You can't help but be struck by the FDA response. Why do they feel the need to protect the conventional meat industry by undermining the EWG report, especially given what we already know about the dangers in our food supply? It's a fact that 80 percent of antibiotics are used in livestock, mostly as growth promoters. It's also a fact that overtime the sub-therapeutic use of antibiotics, meaning using them before an animal gets sick, causes the formation of antibiotic resistant superbugs. And ?nally, we know that these bugs are dif?cult to treat and sometimes deadly, according to Marion Nestle.

The EWG didn't mince words in its response, "This is the best the agency can do? It has been failing to protect the public health on this issue for 40 years, only recently issuing a voluntary guidance to scale back on the worst antibiotic abuses."

The FDA seems to be nitpicking the report instead of working its hardest to stop the sub-therapeutic use of antibiotics in the livestock that we eat everyday. It's ?nding the positives in the NARMS data instead of dealing with the realities of resistance–18,000  people die of antibiotic resistant superbugs every year, more than are currently dying of AIDS in the U.S.