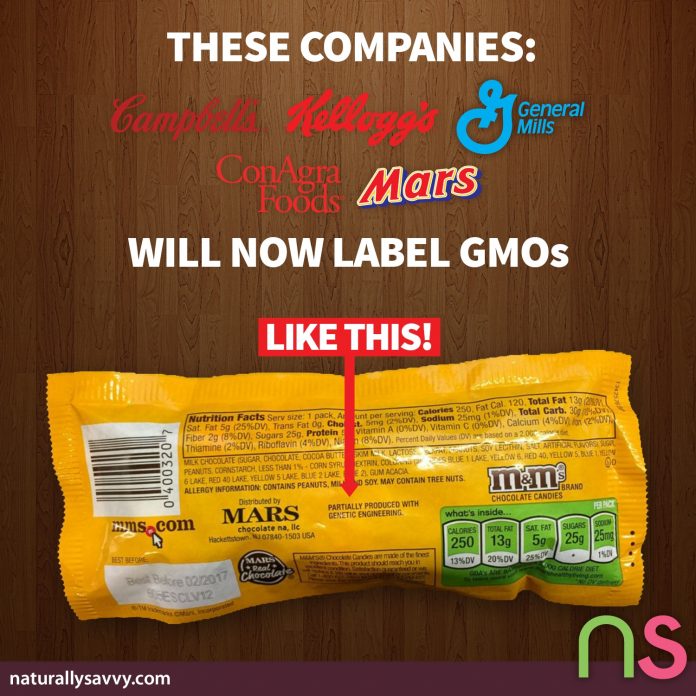 Following a successful effort to block the DARK Act in the Senate two weeks ago, coupled with Vermont's GMO labeling law set to take effect on the first of July, five major food companies have announced that they will start labeling genetically engineered ingredients nationwide! That's right: Campbell's, Kellogg's, General Mills, ConAgra and Mars all announced that as soon as next week, they will begin labeling their products that contain genetically engineered ingredients.

The DARK Act (Deny Americans the Right to Know,) introduced by Senate Agriculture Chairman Pat Roberts, failed reach the required sixty votes needed to move forward. If passed, The DARK Act would have made GMO labeling voluntary, revoking state's rights to implement laws requiring mandatory GMO labeling. The interesting thing is, is that we've already had voluntary GMO labeling since introduction of GMO foods in the 90s! However, we haven't seen one of the big food companies label GMO ingredients voluntarily. On the contrary, these same companies have spent millions on PR campaigns designed to keep consumers in the dark about the food they are producing.

For context, let's take it back a few years to better understand the magnitude of this announcement. More than thirty states across the U.S. have aimed to get genetically engineered foods labeled through legislation and ballot initiatives. Under the umbrella of the GMA (Grocery Manufactures Association,) these mega food companies created websites, falsified studies, personally attacked food movement leaders and influencers, all to keep consumers in the dark about GMO ingredients in their food. To their dismay, Americans still wanted to know what they are eating. In fact, 90% of Americans want foods made with GMOs to be labeled. This is an issue that crosses party lines, socio-economic barriers, racial and gender divisions for one simple reason… it is our food. Everyone who watches what food they put in their bodies have been fighting for clear labels on food products across the U.S. for years.

The Vermont law only covers products that have been made using genetic engineering. So for example the milk and cheese from dairy cows that ingest GMO feed, would not carry a GMO label. Consistent with non-GMO project standards, anything with less than 0.9% genetically engineered ingredients does not have to be labeled. The same rule applies to food offered for immediate consumption such as food served in restaurants, alcoholic beverages or foods that use genetically engineered processing aids or enzymes. The Vermont law was based off the GMO labeling standard used across the European Union. In truth, similar labeling is already present in 64 other countries so it seems like this shouldn't have been such a hard fought victory, right? Well, that's where the big food companies have denied us of this basic right- the right to know what we are eating and feeding our families.

The most popular and effective argument from the companies that make and profit from GMO ingredients, was that labeling would cost consumers an estimated $400 more per month in groceries. This was disproved multiple times by proponents of GMO labeling, independent studies, food manufacturers, grocers, private labeling experts and so on, but remained a talking point used by lobbyists, representatives and elected officials for years. However, when companies such as Mars rolled out products like Peanut M&M's the minor costs of adding a few words to their existing packaging was not passed onto the consumer as threatened previously. What's more is that these companies actually admitted last week that the new GMO labels wouldn't cost the consumer anything.

Simply put, GMO labeling won't increase food prices. Food companies change their labels all the time and have been quoted saying that changing labels is factored into the cost of doing business. It's nice to hear these companies finally admit the truth, and that they support transparency and plan to give consumers what they want. Clear, on package GMO labeling, so they can make an informed choice on how to feed their families. Prior to the DARK act failing, Campbell's became a frontrunner by becoming the first major food company to announce their new GMO labeling policy. Campbell's declared that they would support mandatory, clear, on-package GMO labeling, while at the same time, breaking away from the GMA. Here at Naturally Savvy, we commend Campbell's for being a leader and standing up for consumers' right to know. The other four companies, Mars, General Mills, ConAgra and Kellogg's stated that they were simply on target to comply with the Vermont GMO labeling law and defended the use of their GMO ingredients and products containing them.

So, now that these five companies have announced their usage of GMOs and their commitment to labeling them, it begs the question, who will be the next to label GMOs? Weigh in with your comment about GMO labeling and the companies you want to come forth to comply with Vermont and support your right to know.