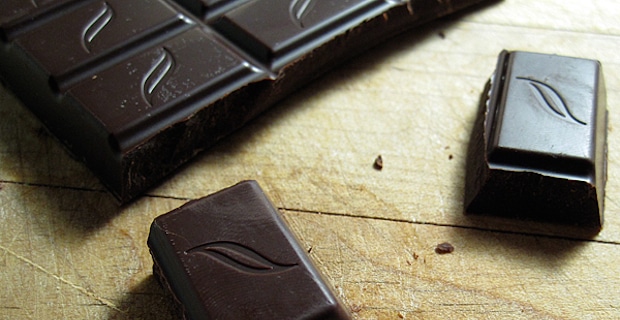 February is the month of love, and this year it couldn't possibly come at a better time. With everyone worried about the economy and just looking forward to the end of snow drifts, cold snaps and the winter blahs, we could all use a little extra love.

And where there's love, there's chocolate.

Like so many other foods, chocolate is a very nutritious food when it is consumed in its purest, whole raw form. Chocolate originates from the cacao bean (also called the cocoa bean), similar to how coffee comes from the coffee bean.

It has been an extremely treasured and valued food for thousands of years. The Mayans and later on the Aztec peoples of Central America used cacao beans as a form of currency. They traded their beans with the Europeans and this was how chocolate was brought to European countries.

Unfortunately, cacao has come a long way from the days of yore and only exists in minute amounts in the chocolate of today. It often has been processed, heated and mixed with an overload of white sugar, hydrogenated oils and dairy products.

In recent years the media has zeroed in on the concept that dark chocolate is healthy and contains anti-oxidants. This information has truth in it because the darker the chocolate is, the closer it is to its purer form. But nothing can beat the raw cacao bean for pure enjoyment and good health.

(Remember this is for the raw cacao bean, heating it will cause it to lose most of these qualities.)

Attention PMS sufferers: the raw cocoa bean brings you great news. As most women already know, a craving for chocolate is a common symptom around the time of menstruation due to a magnesium deficiency. Not many of us are willing to sooth our sorrows in a bucket of spinach, black beans or halibut to up our magnesium levels, but many of us will instinctively devour a chocolate bar-or two or three.

Thankfully, there's no need to feel guilty about your cravings anymore, because you can opt for a healthier option. In essence, you can have your cacao and eat it too.

Cacao contains high amounts of magnesium, which is vital for proper heart functions, relaxation of the muscles and creating a feeling of calmness. Other minerals include calcium, zinc, copper and potassium.

Cacao also contains the amino acid tryptophan, which is a precursor to both serotonin and melatonin. These chemicals do all sorts of wonderful things like create feelings of happiness, regulate appetite, promote relaxation and help us to get a good night's sleep.

Ever wonder why we celebrate love with a box of chocolates? Believe it or not, they really are connected. The answer lies in the chemical phenylethlamine, which is released by the brain and found in only a few foods. It is also known as the "love drug" and is produced by the brain in significant amounts when two people fall in love. Phenylethlamine, which is typically released in smaller amounts, makes us feel connected to others, raises our alertness and focus, and gives us an overall positive outlook on life.

From a nutritional point of view, cacao beans have been said to have the highest level of anti-oxidant concentration of any food. Indeed, they are also very easily absorbed into our bodies, typically reaching our cells in just 30 minutes.

For those of you concerned about caffeine content, cacao contains trace amounts in comparison to coffee and has little to no effect on the nervous system. However, when roasted (heated) it does cause an increase in blood pressure and blood circulation. It still remains unclear why this is so, but researchers believe aromatic substances released during roasting may have something to do with these physiological changes.

To inspire this month's article I figured I should prep myself and sit down with some raw chocolate-oh, the things I do for you, dear reader.

It is amazing what is available now at the health food grocery store. I was delighted to find cacao bars that were fruit sweetened with a sesame-pumpkin seed filling that contained essential fatty acids and low levels of sugar. I took a 10-minute time-out and savored the experience. It is very different in taste than milk chocolate-less sweet, more bitter, dark and rich.

As I was eating I noticed my body instantly relaxing and an almost giddy, euphoric feeling washed over me. I cannot describe it other than feeling a blissful buzz with a mild increase in energy. I felt happy and actually quite wonderful.

Though the bar was about two-thirds smaller than a regular candy bar, I felt very satisfied and any cravings I had were satiated. I have had a terrible sweet tooth and in the past have been able to consume more than a couple chocolate bars in one sitting. I didn't-and couldn't-have had any more, and the benefits outweighed the negatives by a long shot, so it's a guilt free food.

I leave you with this as we look for the light at the end of the tunnel to mark the last of this harsh winter season, lift your spirits and nourish your body through this long winter by indulging in a little raw chocolate.

But choose wisely. Look for organic, raw cacao with no added sugar or dairy. Cacao is available in powder, nibs and beans. It is bitter and not sweet but when mixed with honey, agave nectar, maple syrup, nut or coconut butter, nuts or raisins it really brings out the taste. You can add it to smoothies, oatmeal, cereals, drinks-wherever you think chocolate belongs. Some health food stores even have raw cacao bars, ready to eat.

For everything you wanted to know about chocolate (and more) head to All Chocolate.