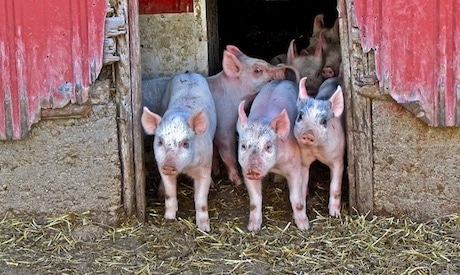 The five-month study, conducted by researchers at Flinders University in Australia and the University of Iowa, noted frequent and severe bouts of stomach inflammation as well as enlargement of the uterus among pigs who ate the genetically modified corn and soy.

Rates of severe stomach inflammation were nearly three times as high for the pigs who ate the genetically modified corn and soy versus the control group. For male pigs, it was four times as high. Lead researcher Judy Carman of Flinders University said in a statement that the use of pigs was important because "we eat them," and because there are striking similarities between the digestive systems of humans and pigs. "We need to investigate if people are also getting digestive problems from eating GM crops," Carman said.

"The results indicate that it would be prudent for GM crops that are destined for human food and animal feed … to undergo long-term animal feeding studies preferably before commercial planting, particularly for toxicological and reproductive effects," suggested Carman and her colleagues.

The Chicago Tribune reported that Monsanto, the leading producer of genetically modified soybeans and corn, questioned the study and the focus on uterine size and stomach inflammation instead of "body weight and feed conversion"-factors the company claims are more "routinely used as endpoints in health assessments." The study researchers said their findings on weight and feed efficiency were similar to Monsanto's, adding they were "superficial studies," and that looking past that was when they found "significant evidence of harm from eating GM crops."

The Tribune also reported that Andrew Kimbrell, executive director for the Center for Food Safety said the research raises serious questions about the long-term implications of genetically modified foods. "It is grossly negligent that neither the companies nor the government have conducted these rigorous types of studies in the 15 years that GE products have been on the market. Until further long-term, independent studies are done, the public are unwittingly participating in the safety testing of these products."