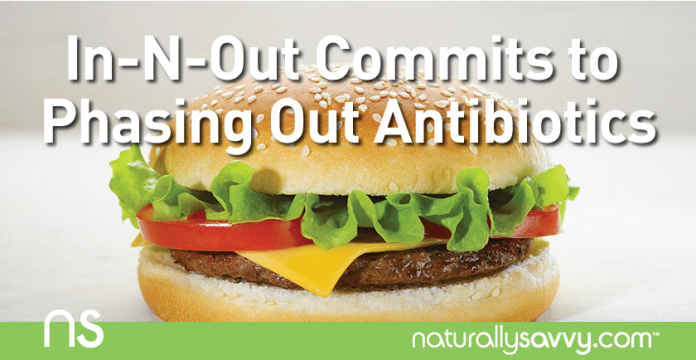 more fast food company will reduce the amount of antibiotics in its burgers.

human medicine and we've asked our suppliers to accelerate their progress

Program told Naturally Savvy. "We continue to let the company know we would

them to provide a sustainable, humanely raised, grass-fed alternative on the

menu the best way forward for moving quickly to implement this policy."

commitment, if followed through "will force significant change in in its supply

chain on the West Coast," Hamerschlag said. It would force mega feedlot suppliers

sick in the absence of routine antibiotics."

Burger, a California-based fast food chain with over 300 restaurants in several

western states, became a target of a campaign by advocacy groups. The coalition

of over 50 public interest groups sent a letter to the company. "I urge you to commit to only serving meat at In-N-Out

restaurants that is raised without the routine use of antibiotics," the letter

In a letter this week, the coalition acknowledged In-N-Out's statement on antibiotics in

its beef supply chain. "We are heartened and encouraged by In-N-Out Burger's

Read more about how antibiotics in our meat is making us sick.

"By committing to beef raised without routine antibiotics, In-N-Out

industry further in that direction."

Removing the routine use of antibiotics from beef production is

important because antibiotic resistance is a big problem. At least two million

people every year in the U.S. become infected with bacteria that are antibiotic

resistant, and at least 23,000 people die as a result, according to the Centers for Disease Control.

The World Health Organization attributes the problem of antibiotic resistance, in part,

to the "inappropriate use" of antibiotics among livestock.