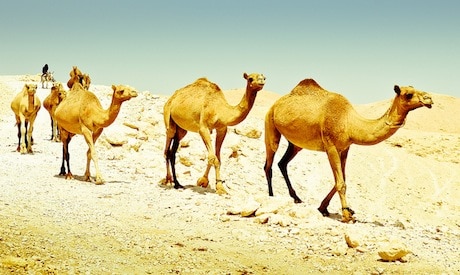 We've heard a lot about superfoods. Typically, they're foods that are loaded with nutrients that outweigh their caloric intake. In other words, they have massive pros that outweigh the potential cons. These foods are usually high in antioxidants, vitamins, minerals, amino acids, fiber or protein. Lately, kale has been getting a lot of noteworthy attention from health and wellness outlets around the world, and rightfully so. It's a pretty versatile food that can be used in salads or even in smoothies. Coconut oil has also gotten a lot of attention lately, also for its versatility as a superfood and its numerous health benefits. So the question now naturally is, what's next? Would you believe camel milk?

A report from CNN appears to indicate that the next big superfood could actually be camel milk. While camels produce only half as much milk as cows, this is certaintly an instance where quality outweighs quantity. Camel milk has three times more vitamin C than cow's milk and has been shown to help heal food allergies and gastrointestinal problems. Furthermore, because of its immune properties it can actually help support those who suffer from autoimmune conditions including autism.1

TakePart.com examined the nutritional benefits of this new superfood, including the fact that camel milk has less than half the fat of cow's milk and also packs a good punch of iron and B vitamins. Because of this, it's often prescribed to patients recuperating from a number of ailments in countries including Russia and India. Current studies are analyzing the positive effect it can have on preventing diseases such as diabetes and heart disease.

While the FDA hasn't officially approved it for sale in the United States as of yet, supporters for camel milk are certainly popping up across the world. As a matter of fact, in the United Arab Emirates a company called Camelicious is quickly becoming the biggest and most well-known distributor of what people are now calling the next great superfood.

How do you feel about all this? Would you be willing to give camel milk a try?

The Super Powers of Greens