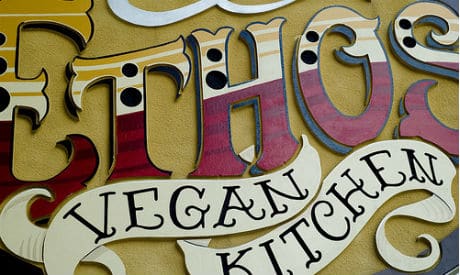 No other conversation about food gets such a heated response as the moral question of whether or not we should eat animals. Tell someone with a face full of greasy bacon that the pig they're chewing on was smarter than the average dog, and they'll likely scoff at you. Or make smacking sounds with their lips, "and probably tastier, too."

Okay, of course it takes all kinds, and we have had a long history as a meat-eating species. But it's no secret that the meat industry has drastically altered our relationship with livestock animals in the last century. And no matter where you sit on the ethical side of the discussion, the health reasons for adopting a plant-based diet are compelling.

Our hunter ancestors ate considerably less meat on a regular basis. It was offset with highly nutritious plant foods-not a bag of chips and a soda. Americans eat way more meat than any other country. We also have some of the highest rates of illnesses connected with animal cholesterol intake such as heart disease, high blood pressure, strokes and cancer in the world.

According to a recent article in the Wall Street Journal, Dr. T. Colin Campbell, author of The China Study, wrote: "Some of the most compelling evidence of the effects of meat and dairy foods arises when we stop eating them. Increasing numbers of individuals resolve their pain (arthritic, migraine, cardiac) when they avoid dairy food. And switching to a whole-food, plant-based diet with little or no added salt, sugar and fat, produces astounding health benefits. This dietary lifestyle can prevent and even reverse 70% to 80% of existing, symptomatic disease, with an equivalent savings in health-care costs for those who comply."

Modern meat nowhere near resembles wild animals we hunted. Most animals now live in crowded, filthy factories and never see the light of day, save on the way to slaughter. They eat unnatural diets full of genetically modified soy and corn, antibiotics, growth hormones and other insalubrious ingredients (sometimes its their fellow cow).

A recent study released by Loma Linda University found that vegetarians live longer than meat eaters on average 9.5 years more for men and 6.5 for women. The average lifespan of a vegetarian male is 83.3 years and 85.7 years for women.

Yet according to a July 2012 Gallup poll, only 5 percent of Americans consider themselves to be vegetarian. Vegans-eschewing dairy and eggs as well as meat-just 2 percent of the population.

Countless health experts from Dr. Oz to Dr. Dean Ornish have touted the benefits of not just reducing meat intake, but adding fresh, whole fruits vegetables, grains and legumes to our diets. And certainly all health experts agree that reducing the amount of fast processed junk food is our number one defense against developing obesity and other diet-related illnesses.

Campbell notes, "Plant-based foods have plenty of protein and calcium along with far greater amounts of countless other essential nutrients (such as antioxidants and complex carbohydrates) than meat and dairy."

And according to the Loma Linda study, vegans weigh an average of 30 pounds less than meat eaters and 5 units lighter on the BMI (body mass index scale). Both vegans and vegetarians have less insulin resistance than meat eaters. They have more regular exercise habits, and are less likely to smoke than meat eaters.