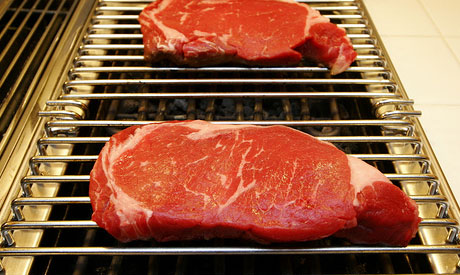 A recent study that appeared inNature Medicine suggests more evidence for an increased risk for heart disease from eating red meat. What was the culprit this time? Carnitine and a complicated sounding compound called trimethylamine, or TMA for short.

The researchers proposed an overly simplistic mechanism: red meat, which contains carnitine, is converted to TMA by intestinal bacteria and TMA levels rise in the bloodstream which, in turn, increases the risk of heart disease. Seems straightforward, right?

TMA is a compound that is found naturally in some foods such as fish and seafood, or it can be made by our intestinal bacteria from TMA precursors such as choline (found abundantly in fish, seafood, eggs, liver, spinach, asparagus, mushrooms, miso) and carnitine (found mostly in meat, fish, seafood and tempeh). Read more about the health benefits of mushrooms

What did the study find?

The mouse study served as a model, which used a carnitine supplement, to see whether or not free carnitine [not carnitine from food] could increase the amount of TMA production, which it did.

Next, the authors examined data from several existing epidemiological studies which tried to find an association between red meat consumption and increased heart disease risk (research that finds associations between two things but cannot prove that one causes another). In this case, higher blood levels of TMA were found in those who regularly ate red meat, and in some studies, meat was implicated in heart disease.

Here’s the problem: data from epidemiological studies are known to be poor quality because the information is self-reported and not measured. The other major problem with these studies is that the researchers are unable to control other lifestyle behaviours which can affect the results. Specifically for example, many of the studies used by this current analysis found that as red meat consumption went up, so too did smoking, trans fat intake, history of angina/blood pressure, and levels of activity decreased; known contributors for cardiovascular disease.

Eating red meat doesn’t lead to increased smoking or trans fat intakes, but studies have shown that those who report eating the most red meat are report eating less fruit, vegetables, and fiber, and consumed more refined flour, sugar and grain and seed oils.

Welcome to the world of confounding variables: data that interferes with the ability to accurately make conclusions.

In simplest terms, the researchers' thinking went something like this: even though there isn’t any good research to support the idea that red meat increases the risk for heart disease, we’ll assume it does, and because red meat is an excellent source of carnitine, and a study using supplemental carnitine on mice increased TMA production, then, TMA must increase the risk as well

The resulting stretch resulted with the following title for their study “Intestinal microbiota metabolism of l-carnitine, a nutrient in red meat, promotes atherosclerosis.”

Their study proves nothing of the sort.

Given that the starting premise of this study is flawed because it used data from poorly designed research, and that the conclusions of the authors are so incongruous with the best available research on red meat consumption and heart disease, it’s a wonder that anyone who has a basic understanding of research would consider its usefulnessRead more about cholesterol

Carnitine is an essential compound needed for efficient energy production. It helps cells burn fat for fuel which is why the body produces, and concentrates it in organs with high energy needs such as the liver and kidneys, as well as muscles. Red meat is also an excellent source of zinc, iron, vitamin B3, B12, protein, and potassium and anyone who’s thinking of cutting it out of his or her diet based on these latest headlines, can confidently reconsider.