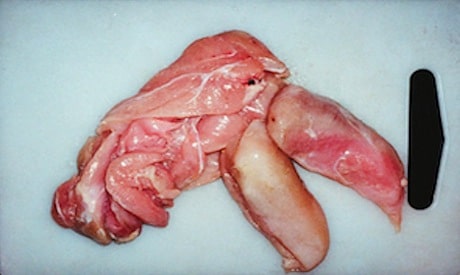 The meats posing the greatest human health risks from foodborne illness threats are chicken and ground beef, according to rankings released by the Center for Science in the Public Interest.

In a study, entitled “Risky Meat: A Field Guide to Meat & Poultry Safety,” [PDF] the CSPI ranked 12 categories of meat and poultry based on outbreak reports associated with the types of meat, as well as the likelihood of hospitalizations connected with the outbreaks, reports Food Safety News.Read more about food outbreaks

CSPI says it published the report to “inform stakeholders throughout the food chain of steps to minimize risks inherent in these foods,” as well as to help consumers "take precautionary steps, such as safer handling and more thorough cooking.” The USDA Food and Safety Inspection Service responded to the report by saying initiatives are already underway to reduce the prevalence of harmful pathogens.Read more about safe food handling

Food Safety News reports that Dr. Elisabeth Hagen, USDA Under Secretary for Food Safety said, “We applaud CSPI’s ongoing efforts to educate consumers about food safety." She added that "while we have made progress in making food safer-including cutting E. coli O157-related illnesses in half, we still have work to do. As Salmonella rates continue to stagnate, we look forward to CSPI’s support, and the support of other groups committed to food safety, of our efforts to reduce this dangerous foodborne pathogen, including modernization of the poultry inspection system.”