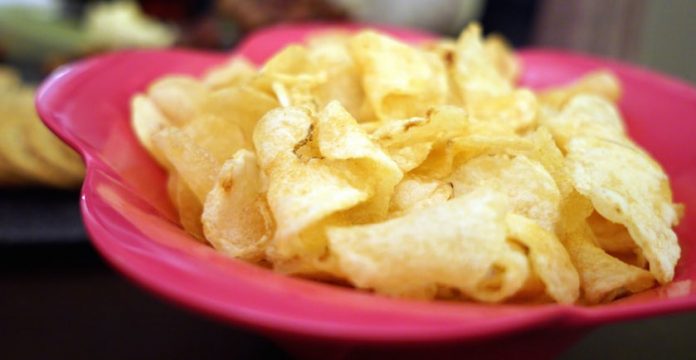 We just can't get enough salt. Chips, nachos, and popcorn make the ideal party foods; they're easy to share, great for casual snacking, and the perfect finger foods. But too much of a good thing can be trouble. Not only are they a high-calorie, low-nutrient food, many chips and other salty snacks contain Scary Seven ingredients like MSG (monosodium glutamate) and partially hydrogenated oils (trans fats) that can wreak havoc on your health.

• Potato chip ingredients should be simple: potatoes + oil + salt. But some seasoned varieties may contain flavor enhancers – some natural, some not. • Glutamate, an amino acid, occurs naturally in many foods, but the problem arises when flavor-enhancing compounds called free glutamates are added to foods, as is the case with MSG. They act as excitatory neurotransmitters, causing the nerves in your brain to fire rapidly and repeatedly. While this stimulation heightens our sense of taste, it also can cause a variety of symptoms, including impaired memory, perception, cognition, and motor skills.

• Yeast Extract is a flavor-enhancing additive containing free glutamic acid, a component of MSG, but is less concentrated. Also, its extracting process is less harsh, in that it doesn't require the use of chemicals the way MSG does. You may still have a reaction to foods containing yeast extract, since it is a form of free glutamic acid.

• Foods that include less than 0.5 grams of trans fat per serving are allowed to state "0" trans fat on the Nutrition Facts panel-it's a label loophole. If you see an ingredient listed as "partially hydrogenated", avoid it because that means the product does contain trans fat. Trans fat not only increases the risk of heat attack by raising LDL and triglyceride levels but also has been linked to prostate cancer, breast cancer, Alzheimer's disease, diabetes, and obesity.

• Mindlessly knocking back a whole bag of potato chips is equivalent to eating about five servings. That's around 750 calories and 40 grams of fat! Measure your portion size according to the package before you snack.

• Baked chips give the illusion that since they are not friend, they are a healthy snack to be eaten with abandon. Remember, they are still a treat and contain quite a bit of sodium.

• The word Lite on a label implies the product is low in calories, but it may be referring instead to the color, flavor, or texture. Read the Nutrition Facts panel and the small print on the package to carefully to determine what "lite" really means.

• After evaluating the most popular brands of plain and multigrain tortilla chips, we found the ingredients to be relatively clean, with the major ingredients being corn, vegetable oil, and salt. The biggest difference is that the natural varieties use organic, non-GMO corn.

• Plain popcorn is naturally low in calories, but it's the toppings that tip the scale. One tablespoon of butter provides 100 calories and 11 grams of fat. A healthy option is to drizzle extra-virgin olive oil or coconut oil over freshly popped corn and sprinkle some nutritional yeast flakes for a cheesy flavor and B vitamins. [Editor's Note: Our favorite popcorn topping in Barlean's Butter Flavored Coconut Oil.]

Read more about how to make popcorn a healthy snack

Table salt is composed of sodium chloride (the chemical name for table salt) and added iodine. Sea salt, on the other hand, is evaporated sea water and contains dozens of minerals from the ocean. White sea salt has been washed, so as a result some of the minerals have been washed away. Best Types: gray, pink, or black sea salt. Himalayan salt is another good alternative, and all varieties are great for cooking. Try Mercola's Himalayan Crystal Cooking Salt or Redmond Real Salt.

• Low Thyroid Function: People with low thyroid function might yearn for salty foods, but their bodies are, in fact, in need of iodine, a mineral in salt. Other symptoms might include cold hands, feeling tired, and difficulty losing weight. Consult your doctor if you are experiencing these symptoms.

• Adrenal Fatigue: Low adrenal function can cause salt cravings. If you lie wide-wake at three o'clock in the morning and have symptoms of depression, speak to your doctor about testing your adrenal hormone levels-produced by the glands located above each kidney-via a simple blood or saliva test.

• Low Iron: Craving salty foods may also be a symptom of iron deficiency. A simple blood test can identify if iron-deficiency anemia (a shortage of red blood cells in circulation) is the cause or a factor in your fatigue.

READ MORE: 5 Most Common Nutritional Deficiencies and How to Beat Them